PAKISTAN: Taxila, One Of The Most Important Archaeological Sites In Pakistan 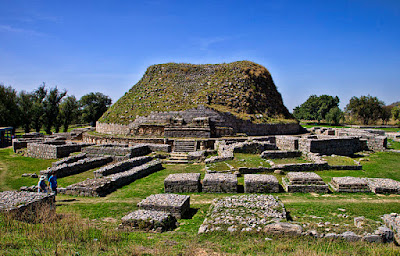 Dharmarajika stupa,Taxila
Taxila is an ancient city in Pakistan, just 30kms north of Islamabad. Taxila is one of the most important archaeological sites in Pakistan and the world. 18 of its sites are on the UNESCO World Heritage List.

The city dates back to the Ancient GandhAran city of Takshashila or Takkasila or Taxila an important Vedic/Hindu and Buddhist center of learning from the 6th century BC to the 5th century CE.

This is the region from where Buddhism travelled to the far east - and Persians, Greeks under Alexander the Great, Central Asians and Hindus all subsequently left their mark.

You can watch the sun set from the remains of a Buddhist monastery or wander through the streets of an excavated Persian city in the knowledge that there are two older ones buried below. Today, Taxila is the center of Pakistan's engineering industry.

Taxila meaning City of Cut Stone or Takṣa Rock is an important archaeological site of the ancient Indian subcontinent, located in the city of Taxila in Punjab, Pakistan. It lies about 32 km (20 mi) north-west of Islamabad and Rawalpindi, just off the famous Grand Trunk Road.

Taxila was designated a UNESCO World Heritage Site in 1980 in particular for the ruins of the four settlement sites which reveal the pattern of urban evolution on the Indian subcontinent through more than five centuries.

The serial site includes a number of monuments and other historical places of note in the area besides the four settlements at Bhir, Saraikala, Sirkap, and Sirsukh. They count 18 in all:

In a 2010 report, Global Heritage Fund identified Taxila as one of 12 worldwide sites most on the Verge of irreparable loss and damage, citing insufficient management, development pressure, looting, and war and conflict as primary threats.

In 2017, it was announced that Thailand would assist in conservation efforts at Taxila, as well as at Buddhist sites in the Swat Valley.

The uttarapatha, the northern road—the later Grand Trunk Road or GT Road—the royal road which connected Gandhara in the west to the kingdom of Magadha and its capital Paṭaliputra in the valley of the Ganges in the east.

The northwestern route through Bactria, Kapisa, and Puṣkalavati.

The Sindu or Indus River route from Kashmir and Central Asia, via Srinagar, Mansehra, and the Haripur valley across the Khunjerab pass to the Silk Road in the north to the Indian Ocean in the south. The Khunjerab passes between Kashmir and Xinjiang—the current Karakoram highway—and was traversed in antiquity.

Taxila is home to a vast network of ancient ruins, connected by road. Unfortunately, the museum there is quite small and without much information aside from a brief timeline. You should read about the site before you go, as the museum won't tell you very much.

There are no dioramas or reconstructions of what the sites looked like, so you'll need to use your imagination.

The main ruins of Taxila are divided into three major cities, each belonging to a distinct time period. The oldest of these is the Hathial area, which yielded surface shards similar to burnished red wares or soapy red wares recovered from early phases at Charsadda, and may date between the 6th century BCE and the late 2nd millennium BCE.

In addition to the ruins of the city, a number of buddhist monasteries and stupas also belong to the Taxila area.

Some of the important ruins of this category include the ruins of the stupa at Dharmarajika, built by Maurya emperor Ashoka, where according to local custom bone and tooth fragments from the Buddha were buried, and where a Greek-style statue of Aphrodite was unearthed.

From Islamabad International Airport you can go in and out of Taxila.

Taxila is located 30kms north of Islamabad. You can hire a Taxi or a Car.

You may get around via Taxi or Car

At the ruins, self-deputized tour guides may begin to show you around. Frequently their English is not very good and they don't really tell you anything you can't read from the signs, then strongly imply that they want a tip.

If you want some local color, go ahead, but otherwise tell them to thanks immediately. But now some educated guides are offering there services. You may be approached by numerous guides at each site. In addition, people selling trinkets like small statues and allegedly old coins may come up to you.

There is little shade at Taxila and it may be very hot. But it is at some spots, overall Taxila is Rich in Greanery with fountains. Bring water, a hat, and sunscreen.

- Taxila Museum dedicated mainly to the remains of Gandhara civilization.

You may have meals at the below Restaurants:

Though be advised you may get sick. A better option is to bring your own snacks and eat a meal in Islamabad.

Along the main highway to and from the various ruin sites there are a number of shacks selling trinkets, pots, and a local phenomenon nicknamed the Disco cat.

The disco cat is a plaster statue of a cat or panther, covered in small square pieces of mirror, much like a disco ball. Small ones should run you 600 rupees, while larger ones can be 2,000 or more. They make a great conversation piece or gift.

No separate accommodation is needed for Taxila, one can easily stay in Islamabad and visit Taxila. But If you still need accommodation in Taxila then there is PTDC motel which is located in front of Museum and certain other rest houses in Taxila.

PTDC Motel, though the rooms are basic and can use some extra cleaning, it's an acceptable lodging.
Across from the museum.

Gandhara Motel, this hotel offers much better value than the nearby PTDC hotel.
On Khanpur Road a few hundred meters south of the museum.