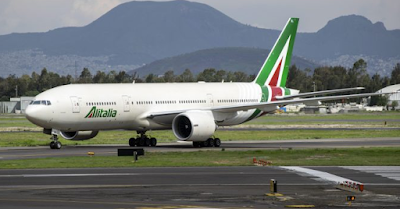 A plane belonging to Italy’s national carrier was forced to make an emergency landing in Abu Dhabi on Monday following the death of a passenger.

Kailash Chandra Saini, 52, was travelling with his son, Heera Lal, 26, from New Delhi to Milan when he suddenly fell ill and died.

Pilots on the Alitalia flight were forced to divert to Abu Dhabi International Airport, where Mr Saini was transferred to Mafraq hospital.

Officials said his body was expected to be repatriated to his home state of Rajasthan, India, on an Etihad flight on Wednesday.

Embassy officials have been assisting the family with the formal process of repatriation.

His son, Heera Lal Saini, who was also travelling with his father to Milan, was in Abu Dhabi and talked briefly with the press but was not in position to share any further details.

The Indian embassy in Abu Dhabi is helping Heera repatriate his father's body to India.

The Department of Health in Abu Dhabi has issued a death certificate on Tuesday to help repatriate the body.

The son will be carrying the body of his father to India on Wednesday from Abu Dhabi.

The company has its head office in Fiumicino, Rome, Italy. Its main hub is Leonardo da Vinci-Fiumicino Airport, Rome, and a secondary is Linate Airport, Milan.

In 2018, it was the twelfth-largest airline in Europe. The name "Alitalia" is an Italian portmanteau of the words ali (wings), and Italia (Italy).

On 2 May 2017, the airline went into administration after the Italian government formally approved the move.

Between 2009 and 2011, Alitalia renewed its fleet with 34 new aircraft, while 26 older planes were retired. The renewal process ended in early 2013.

These new planes are not owned by Alitalia itself, but are leased mostly from Aircraft Purchase Fleet, an Irish leasing company created by former Air One owner Carlo Toto primarily to purchase the new Alitalia fleet.

Following the Air One merger, the entire fleet that was not already leased from other lessors, plus the former Air One fleet that was owned by Air One outright, came under the ownership of APF, a subsidiary of Toto's Italian conglomerate Toto Holding.

The entire fleet, except the two new A330s, is now on the Irish registry instead of the Italian registry.

Alitalia codeshares with the following airlines:

Incidents and accidents since Alitalia-CAI's launch of operations on 13 January 2009:

On 24 April 2011, an attempt was made to hijack Alitalia Flight 329, en route from Charles de Gaulle Airport, Paris, France to Fiumicino Airport, Rome and divert it to Tripoli International Airport, Libya.

The hijacker, reported to be an advisor to the Kazakhstan delegation to UNESCO, was subdued by cabin crew and other passengers. He was arrested and taken into custody after the aircraft made a safe landing at Rome.

On 29 September 2013 at 20:10, an Alitalia Airbus A320 flying from Madrid–Barajas Airport to Leonardo da Vinci–Fiumicino Airport failed to lower the landing gear during a storm on landing and the aircraft toppled, skidded off the runway and crashed.

10 passengers suffered minor injuries and all 151 passengers and crew were evacuated and taken to the hospital.