USA: American Airlines Plane With 170 On Board Catches Fire At O'Hare International Airport 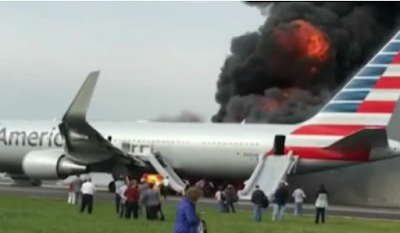 A plane caught fire just before take off at Chicago’s O’hare airport. The American Airlines jet had nine crew members and 161 passengers on board.

Seven passengers and a flight attendant who were slightly injured and taken to hospital, the airline said.

The Aviation Industry have been under huge pressure in recent months after two Boeing Max jets crashed in Indonesia and Ethiopia, killing a combined 346 people.

Some 189 people died when the Lion Air flight crashed into the Java Sea shortly after taking off from Jakarta followed by the Ethiopian Airlines disaster that killed 157 people six minutes after the plane took off from Addis Ababa.