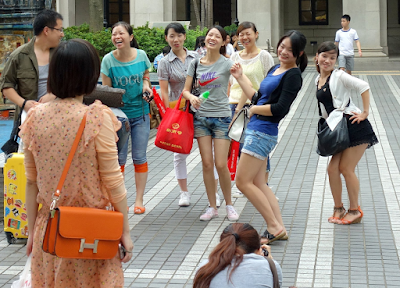 Chinese travel to the US is falling after more than a decade of rapid growth. And that has cities, malls and other tourist spots scrambling to reverse the trend.

Travel from China to the US fell 5.7 per cent in 2018 to 2.9 million visitors, according to the National Travel and Tourism Office. It was the first time since 2003 that Chinese travel to the US slipped from the prior year.

Trade tensions with the US as well as economic uncertainty in China are among the reasons for the slowdown.

China commands some of the highest tourism traffic to the US and any fall-off will be felt by destinations that rely on Chinese spending power. Experts say the tourism industry must do more to keep up with Chinese travellers and their changing needs.

The number of Chinese visitors to the US has fallen for the first time in 15 years, after more than a decade of rapid growth, but friction between the two countries is just one reason for the slowdown, according to travel industry insiders.

Travel from China to the US fell 5.7 per cent in 2018 to 2.9 million visitors, according to the National Travel and Tourism Office, which collects data from US Customs forms. It was the first time since 2003 that Chinese travel to the US slipped from the previous year.

But because China commands some of the highest tourism traffic to the US, any fall-off will be felt by destinations that have come to rely on Chinese spending power. In 2017, the country had the fifth highest number of US-bound tourists, behind Canada, Mexico, Britain and Japan.

China did not crack the top 10 list until 2011 and has been climbing ever since. Spending by Chinese visitors – which does not include students – ballooned more than 600 per cent between 2008 and 2016, to nearly $18.9 billion.

To hold on to those dollars, experts say the tourism industry must do more to keep up with Chinese travellers and their changing needs.

Last summer, China issued a travel warning for the US, telling its citizens to beware of shootings, robberies and high costs for medical care. The US shot back with its own warning about travel to China.

Wang Haixia, who works at an international trade company in Beijing, travelled to the US in May for her sister’s graduation. She and her family planned to spend 10 days in Illinois and New York.

Wang says she might have stayed longer but did not want to contribute to the US economy amid the trade war.

I cannot cancel this trip because I promised my sister I would go to her commencement, she said. My relatives will contribute more than 100,000 yuan (US$14,500) to America just staying for 10 days, and that’s enough, she said.

Another reason for the fall in Chinese visitors to the US is economic uncertainty in China which has led travellers at the lower end of the market to holiday closer to home, according to Wolfgang Georg Arlt, director of the Chinese Outbound Tourism Research Institute.

A study by the institute found that 56 per cent of travellers leaving China in the last three months of 2018 went to Hong Kong, Macau or Taiwan compared with 50 per cent in 2017. Those who do travel further are seeking out more exotic destinations like Croatia, Morocco and Nepal.

Chinese travel to the US had already been moderating from its breakneck pace earlier this decade. In 2000, 249,000 Chinese visited the US.

That tripled to 802,000 by 2010, then tripled again by 2015, in part because of higher incomes, better long-haul flight connections and an easing of visa restrictions, according to US consulting firm McKinsey.

The US welcomed more than 3 million Chinese visitors in 2016 and 2017. But year-over-year growth edged up just 4 per cent in 2017, the slowest pace in more than a decade.

Most industry-watchers agree that any downturn is temporary, since China’s middle class will only continue to expand. The US government forecasts Chinese tourism will grow 2 per cent this year to 3.3 million visitors, and will reach 4.1 million visitors in 2023.

Even if the Chinese economy cools, it’s still going to continue to be a very good source of growth for the travel industry, said David Huether, senior vice-president of research for the US Travel Association.

They have also rapidly adopted smartphone based payment systems.

A lot of companies looked at the Chinese market as easy money, but we have to be relevant to the Chinese, Becker said. Attract China, for instance, has helped luxury stores in Manhattan incorporate Jeenie, a live translation app, and add Alipay and WeChat Pay for mobile payments.

Alipay is owned by Alibaba.

Others have also been stepping up their efforts. The Beverly Centre mall in Los Angeles used to cater to busloads of Chinese tourists. Now, it is focusing on small groups of less than 10 VIP shoppers, says Susan Vance, the mall’s marketing and sponsorship director.

The mall has also pushed stores to offer China UnionPay, a digital payment service. More than 100 stores now have it, Vance says, up from three in 2014.

Tourism officials are also catching on to WeChat. In late 2017, Washington DC became the first US city to launch an interactive guide in the app.

Chinese travellers can use it to get directions to attractions, access audio tours in Mandarin and find dining and shopping outlets. The city’s marketing office has one staff member dedicated to WeChat.

Washington also recently launched a Welcome China program that teaches hotels, restaurants and other venues about Chinese customs and encourages them to offer things like Chinese-language menus or in-room slippers. So far 44 hotels and a handful of restaurants have signed on.

Chinese tourists are shunning the US amid the trade war and opting for more welcoming destinations in Europe, according to Jane Sun, chief executive officer of Asia’s largest online travel platform Ctrip.

When the China-US trade war started last year, there was a slowdown in Chinese tourists travelling to the US during China’s October golden week holiday in the fourth quarter, which eased when the two countries made progress in their trade talks.

The US slid to tenth spot in the list of China’s top overseas destinations in the week-long holiday in 2018 from fifth the previous year, according to Ctrip.

In the recently-concluded Labour Day holiday in early May, the US ranked as the ninth most popular travel destination for Chinese tourists, down from fifth spot last year. Thailand and Japan remained the top choices for holidaymakers in the country.

Sun is clear about the reason why Chinese tourists are taking their money to European countries such as Italy and the UK because they feel welcomed.

People like to travel to countries that welcome them, she said. When Chinese consumers have the buying power, if they are not going to the US then they are going to the UK, Europe, Australia or New Zealand, they’ll find an alternative.

The US really needs to be very careful if it wants to attract affluent travellers.

China is the world’s largest outbound travel market in terms of numbers and expenditures, according to a report from McKinsey and Company in September, with Chinese tourists expected to make 160 million overseas trips by 2020 and spend over US$315 billion next year.

Ctrip has broadened its reach in recent years to cater to this powerful force, which has grown by a double digit percentage number each year from 2002 to 2013, according to the World Tourism Organisation.

One of the biggest recent beneficiaries of the Chinese tourism boom has been Croatia, which saw a more than fourfold surge in visitors during the May holiday this year as fans of the hugely popular fantasy TV show Game of Thrones flocked to the show’s filming location, according to latest statistics from Ctrip.

Malta and Iceland, which are also featured in the show, saw the number of Chinese tourists rise 300 per cent and 140 per cent respectively over the Labour Day holiday.

Based on our observation, countries which have easier visa applications and direct flights, and have demonstrated hospitality to travellers, will win.

Travel itself is very international we designed our network to cover places that Chinese people are going to travel to.

Revenue generated from international business made up 30 to 35 per cent of Ctrip’s total revenue in 2018, according to the Shanghai-based company’s annual report.

The company, which has a market value of US$22 billion and is increasingly applying AI technology to personalise more trips, will continue to expand globally by serving Chinese outbound tourists, as well as bringing non-Chinese travellers onto Ctrip’s platforms and products.

Ctrip has targeted the international travel market with a string of investments and acquisitions in recent years. In 2016, Ctrip bought UK-based travel search engine operator Skyscanner for US$1.7 billion to complement Ctrip’s positioning on a global scale, according to a statement.

It acquired Silicon Valley based start-up Trip.com in 2017 and relaunched it in the same month as the company’s global brand non-Chinese markets.

In April Ctrip increased its stake in MakeMyTrip, an Indian online travel agency, to 49 per cent through a share swap deal with Naspers, a South African company and the biggest investor in Chinese tech giant Tencent, and has also gobbled up three Chinese travel agencies which operate in the US in the past few years.

Such international M&A expands Ctrip’s addressable market and increases the likelihood that Ctrip turns these overseas markets into earnings drivers over the long run, JP Morgan analyst Alex Yao said in a May research note.

We think Ctrip has an established leadership position in traditional outbound China to overseas, and pure outbound overseas to overseas is likely to play an increasingly important role in driving group growth.

Apart from deals, Ctrip is also developing its own products for non-Chinese markets. TrainPal, a project under Ctrip’s Baby Tiger program that incubates new products, is an online train ticketing service for UK and other parts of Europe.

The rail ticketing app helps customers find the best-priced train fares for their journey by offering split-ticketing, a service which can look through the various price combinations over the same route.

By February this year, ticket sales on TrainPal had grown almost 100 times year-on-year since soft launch of the app last February, according to Ctrip.

Sun believes organic growth, such as self-developed products like TrainPal, should always be a priority for Ctrip though. We have a lot of initiatives internally to make sure everything our customers need will have a Baby Tiger program to incubate it, Sun said.

Sun accepts that Chinese companies face a learning curve when expanding overseas. Beijing based ByteDance has faced regulatory hurdles for its popular TikTok short video app while Chinese bike-sharing firms Mobike and Ofo are retreating from many foreign markets after breakneck growth previously.

Organisational design and talent recruitment represent big challenges for any company that wants to expand abroad, said Sun, adding that finding the right talent that understands overseas markets is the key for smooth expansion.

When you move abroad and talk to train or airline partners, you need people who understand the local market very well.