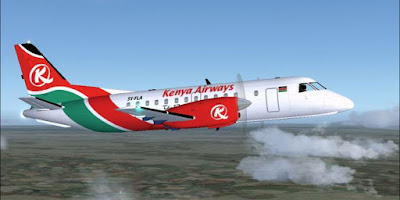 A Kenya Airways pilot on Monday saved 95 passengers and 5 crew members who were headed to Nairobi from Mombasa.

The captain was forced to take precautionary measures after the aircraft's warning system raised a false mechanical alarm.

The flight KQ605 departed Mombasa at 1754 hours and was airborne at 1807hours. However, it was forced to land back in Mombasa at 1834hours.

In a press statement by Kenya Airways, engineers declared the aircraft grounded after they assessed it.

Other passengers with connections beyond Nairobi have been given accommodation in Mombasa to travel tomorrow to their final destinations, part of the statement read.

The airline apologized for the inconvenience and further advised its clients to contact customer care for any queries.

In yet another incident that occurred on March 28, 2019, the pilot of a Kisumu-bound plane saved the lives of over 70 passengers after the plane was unable to land at the Kisumu International Airport.

Upon reaching Kisumu, the pilot observed that the weather conditions were not optimal for landing.

After circling above Lake Victoria for some time to wait for the weather to clear up, he decided to fly back to Jomo Kenyatta International Airport.