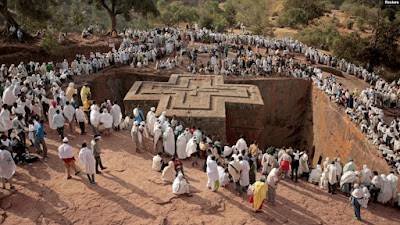 News that a group of gay tourists will be visiting Ethiopia has been met with outrage and death threats from the nation’s religious leaders.

Toto Tours, an American LGBTQ travel company, is promoting a 16-day ‘Treasures Of Ethiopia’ package to the country in October and November.

It promises travellers “an historical and cultural journey to some of the most remote areas of Ethiopia for the adventure of a lifetime.”

Religious groups heard of the plans through social media and are now calling for the government to block the visitors. They are especially incensed that the itinerary includes some religious sites.

The trip was condemned by Tagay Tadele of the Inter-Religious Council of Ethiopia, who said that “tour programmes and dating programmes that try to use our historical sites and heritage should be immediately stopped by the Ethiopian government.” Tadele also urged Ethiopians to “stop supporting these sinful and evil acts.”

Dereje Negash, from the Sileste Mihret United Association, SAID that “Homosexuality is hated as well as being illegal in Ethiopia. Toto Tours are wrong to plan to conduct tours in our religious and historical places.”

He warned that “If Toto Tours comes to Ethiopia where 97% of Ethiopians surveyed oppose homosexuality, they will be damaged, they could even die.”

Dan Ware, the president of Toto Tours, appears determined to go ahead with the trip. “We come with only the greatest respect and humility,” he said, adding that when the tour group arrives in October, “the eyes of the entire world will be on the people of Ethiopia to see what happens to us.”

Countries that criminalise and reject LGBTQ people risk losing out on the burgeoning LGBTQ travel market. In 2016, this was estimated to be worth over US$211 billion in consumer spending per year.

Both male and female homosexuality is illegal in Ethiopia and those found ‘guilty’ face between 7 to 15 years in prison. According to the 2007 Pew Global Attitudes Project, 97% of Ethiopians believe that homosexuality is not acceptable.

It is said to be among the countries with the highest anti-gay sentiment in the world.

Chicago-based Toto Tours organizes sightseeing vacations around the world. It was founded in 1990 primarily catering to all-male, gay clientele but has since expanded to include men and women, regardless of sexual orientation.

Company owner Dan Ware said the controversy began in May when the group posted plans on social media for a tour of Ethiopia, including the ancient rock-hewn churches of Lalibela. The post included a light-hearted play on words, saying, "We will rock you," in reference to the song by music group Queen.

"Just trying to be clever. Just to have a saying. It didn't mean anything other than this experience of seeing this incredible place will change your life," Ware says. "We're not going to do any kind of activism."

Before long, members of Ethiopia's Orthodox Christian community were holding protests. Ware said he has been inundated with angry messages and even death threats.

"It's been spiraling out of control for about 10 days now, ever since May 25 and the blogger's post, and it has gotten worldwide attention. And this has not been by design," Ware said.

In a protest in Addis Ababa, religious leaders said the travel would be an insult to Christianity and to Ethiopian culture.

"All religions and their followers must stand together to save this generation. We are asking the government to stop them (travelers with Toto) from visiting our historical places, and we are warning those Ethiopians who are cooperating with this evil thing," said Tiguhan Kesis Tagay Tadele, secretary general of the Inter-Religious Council of Ethiopia.

Ethiopia outlaws homosexual acts, which carry penalties of up to 15 years in prison. Critics say the American group would be openly defying this law.

"We hate homosexuality; they can't come to Ethiopia and visit Lalibela and other historical places. Because homosexuality is a crime — so if they come here, they will be damaged," said Dereje Negash, the vice chairman of Sileste Mihret United Association, an Orthodox Christian organization.

Ware pointed out it is not illegal to be gay in the country, only to act on it. He also said, despite the vitriol, he has been heartened to hear from many gay Ethiopians who encouraged him to come and thanked him for standing up for gay rights.

Ware has also been in touch with officials at the U.S. embassy in Addis Ababa. He said they told him they know of no history of violence against gay foreigners traveling in the country.

Ware is now weighing his options and waiting to hear from the Ethiopian government on whether they will be allowed in the country, but said he is inclined to go forward with the trip.

"It has been saddening," Ware said. "It's not my intent to harm anyone to cause this controversy. I want it to be resolved."

Ware added that he believes Ethiopia should come to terms with the fact that gay travelers are here to stay. In fact, he said, gay people have long been traveling together and visiting the world's great sites; this fact just hasn't been advertised.

"If the people of Ethiopia think that there has never been a gay group that has come and visited the holy sites or that there will never be one again in the future, they're mistaken," he said. "We have nothing on our foreheads that says, 'He's gay,' and we blend very well."