KENYA: Migingo Island Once Disputed Between Uganda And Kenya 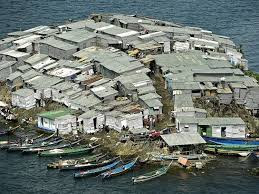 The island was the center of a low-level territorial dispute between Kenya and Uganda and is extremely densely populated.

In July 2009 a survey team found that the island is 510 metres (1,670 ft) east of the Kenya–Uganda border within the lake, a finding supported by openly available Google Earth imagery.

Since 1926, territorial ownership of the island has been consistently shown on maps and in language on official documents as Kenyan.

Ugandan protests revolve around the lucrative fishing rights, mostly for valuable Nile perch, and Ugandan waters come within 510 metres (1,670 ft) of the island.

In July 2009, the Ugandan government shifted its official position, stating that while Migingo Island was Kenyan, much of the waters near it were Ugandan.

The island had been claimed by the Ugandan government in 2008-2009 until 11 May 2009 when Ugandan President Yoweri Museveni conceded that the island is in Kenya.

But continued to point out that Kenyan fisherman were illegally fishing in Ugandan waters, which lie to the west of Migingo.

The Ugandan flag was lowered, Uganda withdrew its military troops, and agreed that all its police officers would leave the island.

A joint re-demarcation line of the border was launched on 2 June 2009 to recover and to place survey markers on land, making delineation of the boundary on the lake more precise, with results released in late July 2009 confirming that the island falls 510 metres (1,670 ft) on the Kenyan side of the line.

The island has a population of about 131 according to the 2009 census, mostly fishermen and fish traders, who are served by four pubs, a number of brothels, and a pharmacy on the island.

A rocky and rugged piece of land with little vegetation, Migingo is one of three small islands in close proximity.

The much larger Usingo Island is 200 metres (660 ft) to the east of the small white rectangle that is Migingo, and Pyramid Island, the largest of the three, is 2 kilometres (1.2 mi) due south of Migingo and 11 kilometres (6.8 mi) north of the Tanzanian border in Lake Victoria.

The boundary delineation in that 1926 agreement and the Constitution of Uganda state that the boundary line runs to the westernmost point of Pyramid Island thence continuing by a straight line northerly to the most westerly point of Ilemba Island.

A line connecting those two points runs 510 metres (1,670 ft) west of Migingo, placing the island within Kenya along with the larger Pyramid and Usingo Islands, as shown on most maps since 1926.

Tiny Migingo's location within 200 metres (660 ft) of the much larger Usingo Island is clear both on Google Earth and on widely available television network videos depicting aerial helicopter photography.

Migingo Island is so small that it is not displayed on some maps. However, it has not emerged from the water recently, despite a Uganda government official's claims.

Two Kenyan fishermen, Dalmas Tembo and George Kibebe, claim to have been the first inhabitants on the island.

When they settled there in 1991, it was covered with weeds and infested with birds and snakes.

Joseph Nsubuga, a Ugandan fisherman, says he settled on Migingo in 2004, when all he found on the island was an abandoned house.

Subsequently, other fishermen from Kenya, Uganda and Tanzania came to the island because of its proximity to fishing grounds rich with Nile perch.

An unusual claim in 2009 by some Kenyan fishermen was that since none of the Nile perch breed in Uganda the nearest Ugandan land and nearest Ugandan freshwater is 85 kilometres (53 mi) away), then the fish somehow belonged to Kenyans.

In June 2004, according to the Kenyan government, Ugandan marine police pitched a tent on the island and raised the Ugandan flag and that of their police department.

Ugandan and Kenyan police have since occupied the island at various times.

A diplomatic row between the two countries arose in February 2009, when Kenyans living on Migingo were required to purchase special permits from the Ugandan government.

On 12 March 2009, a Ugandan government press release proposed that the matter be resolved by a survey, using as a guideline the boundaries set by the Kenya Colony and Protectorate Order in Council, 1926, which is copied into the Ugandan constitution.

On 13 March 2009, several government ministers, including the foreign-affairs ministers Kenyan Moses Wetangula and Ugandan Sam Kutesa met in Kampala, Uganda, and reached an agreement that the fishermen from both countries be allowed to continue conducting business as usual, until the boundary was determined by experts.

They also agreed that Uganda would withdraw the 48 policemen it had deployed on Migingo.

On 27 March 2009, Ugandan and Kenyan ministers travelled to the island where they held negotiations and addressed the residents.

This ended in a row, with Ugandan First Deputy Prime Minister Eriya Kategaya taking issue with Kenyan Minister for Lands James Orengo for calling the Ugandan delegation hyenas during the meeting.

The Kenyan delegation demanded that Uganda withdraw its police. The Ugandan delegation insisted that they would remove the flag only after consulting their president and that the Ugandan policemen were there to keep law and order.

Kenya's Internal Security Assistant Minister Orwa Ojode replied that he would be sending Kenyan police to the island.

Amidst concerns that the dispute could affect cooperation between the two countries and within the East African Community, both Museveni and Kenyan President Mwai Kibaki have voiced confidence that the dispute, including fishing rights, will be resolved amicably.