INDONESIA: LGBT Visitors Having Gay Sex To Be Sent Not To Mental Institution But Prison Or Caning 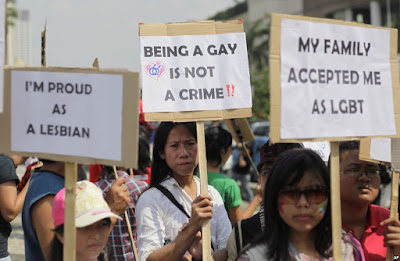 Indonesia’s travel and tourism industry wants visitors that are straight, married, and are traveling with a spouse of the opposite gender.

The ideal tourist Indonesia wants to attract Straight, married, traveling with a spouse of the opposite sex.

For decades Indonesia has been on the top of the list for LGBT tourists from all over the world.

They better think twice before making plans to book their next holiday to Indonesia.

Vacationing in Indonesia with a same sex partner may be a high-risk adventure unless caning is part of an adventure an LGBT tourist traveling to Indonesia wants to include.

Even though the Indonesia Psychiatrists Association concluded being gay is a mental disorder.

Lawmakers from all 10 major political parties in Indonesia want to go a step further and throw anyone caught in having gay sex not into a mental institution but into prison for five years.

A visitor from the US recently posted: What an awesome place, my partner and I have visited all spas in Bali till we stumbled across new UME spa. Wow wow wow.…These times may be over soon.

Last year two men were publicly caned 83 times each for having consensual gay sex in Aceh, the province in Indonesia to practice Shariah law.

In front of the crowd of hundreds of people, men and women separated, they were marched to the front of the stage, told to stand still and then they were whipped or lashed on their back with a cane 83 times.

This while a man counted the number over the loudspeaker, and the crowd cheered, booed, some men in the crowd saying, Hit them harder, others yelling, Let this be a lesson to you.

Riding a tsunami of moral conservatism and anti-gay prejudice, Indonesia’s Islamic political parties appear on the cusp of a major victory, outlawing all sex outside marriage.

Revisions to Indonesia’s criminal code being considered by Parliament would allow prison sentences of up to five years for sex between unmarried people.

Those changes would also criminalize gay sex, the bugbear of Indonesia’s Islamic and secular political parties.

The bill, which reportedly has support from all 10 of the country’s main political parties.

Rights groups and legal experts fear a profound setback to human rights and privacy in Indonesia, one of the world’s largest democracies, and the spread of vigilantism, already common in parts of the sprawling Muslim-majority nation of more than 250 million people.

They are racing to organize opposition. An online petition launched this week has gathered more than 20,000 signatures.

Indonesia, whose constitution guarantees human rights and has ratified many human rights covenants, will be ridiculed by the world for creating a law that is potentially violating many of those rights.

Also last year Indonesian authorities have arrested 141 men at a sauna in Jakarta for allegedly taking part in a gay sex party.

It is the latest crackdown on homosexuality, which is not illegal in the country except for in Aceh Province, but has routinely been the target of police raids and vigilantes.

Indonesia has classified homosexuality as a mental disorder, as a bill to criminalize gay sex is introduced in the country’s parliament.

A report by the Indonesia Psychiatrists Association reads: Gays and bisexuals were at risk of emotional problems such as depression owing to identity crises while transsexuals are susceptible to mental diseases.

A second report was published in 2017 by the Health Ministry. That report claims that homosexuality was against the ethos of the country.

In Aceh 12 transgender men were arrested. Authorities shaved their heads in an effort to turn them into men.

Over the past month, stories from Indonesia detailing anti-trans abuse, arrests and a legislative ban on same-gender relationships have emerged as part of a disturbing pattern.

They arrested 12 waria, or trans women, forced them to strip off their shirts, and cut their hair in public.

Our ulama or Muslim scholars disagree with this disease. This disease is spreading, he said, according to a phone recording posted to YouTube. It’s inhumane if Untung Sangaji is to tolerate these sissy garbage.

This human rights abuse is said to be part of a larger campaign to supposedly prevent LGBT people from affecting young people.

It’s worth pointing out that while Muslim scholars are far more divided on the issue of transgender inclusion than the above statements imply, this neo-traditionalist reading of Islam’s sacred texts has been on the rise in Indonesia for some time.

Human Rights Watch is calling for the immediate release of the 12 trans women and an investigation into the abuses they have suffered at the hands of law enforcement.

To understand the country’s LGBT crackdown, though, it’s worth taking a look back over the past few years.

Aceh, the only province in Indonesia that has adopted Sharia law in a formal way, maintains a well-documented reputation for hostility toward LGBT people.

But all across Indonesia, there has been a marked turn toward religious conservatism.

Police raids, vigilantism and open and violent discrimination against LGBT people or even those just suspected of being LGBT has become rife. 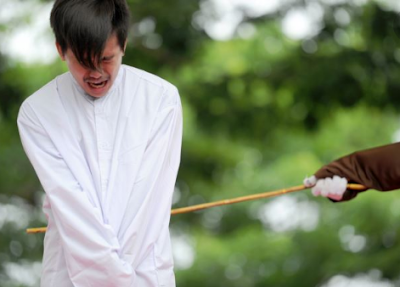 One of two Indonesian men is publicly caned for having sex, in a first for the Muslim-majority country where there are concerns over mounting hostility towards the small gay community, in Banda Aceh

Last year, two men were seized and caned for being gay, while police raids against suspected gay parties resulted in the images of suspected gay individuals being circulated online.

In another development, West Java authorities floated the idea of a special task force to crack down on LGBT people.

It’s estimated that over 300 people in Indonesia were arrested for being LGBT last year, but the true figure may be far greater.

Unfortunately, there are signs that things may become even worse.

However, over the past few years, both Indonesian lawmakers and President Joko Widodo, have increasingly given ground to religious hardliners.

The latest step is a bill currently before Indonesia’s House of Representatives that would, among other things, change several definitions in the criminal code to make consensual relationships between unmarried people illegal.

These changes to the criminal code have been heavily criticized by legal experts for being ill-defined and open to serious abuse.

A similar petition brought before the courts by a religious conservative Islamic group was rejected in December of last year by Indonesia’s Constitutional Court.

Even so, all ten parties in the House of Representatives have supported the legislative changes.

Indonesia’s lawmakers seem intent on passing a bill that will almost certainly impose additional religious laws on the general public and be used to silence and abuse Indonesia’s besieged LGBT community.

The surprising 5-4 verdict in the world’s largest Muslim-majority nation came during a long anti-LGBT crackdown that began in January 2016.

The ruling, while welcomed by the LGBT community, does not end their battle for acceptance.

The Constitutional Court’s decision focused more on the fact that it was the wrong venue to consider such a ban than on the human rights implications.

I am relieved and feel so happy, said Lini Zurlia, a gay rights activist in Jakarta after the Constitutional Court’s decision.

But I’m still worried about the next process at the legislative level, she said. Parliament is expected to consider the ban.

The same day the Constitutional Court ruled, a North Jakarta court sentenced eight gay men to more than two years in prison for taking part in a gay sex party at a sauna, which was recently shut down on the grounds it was the site of sex work.

Analysts say the sentences are further evidence of how criminalization continues to affect Indonesia’s LGBT population.

The major legislation criminalizing LGBT people in Indonesia is not a sodomy law or ban on gay sex, but a vague pornography law that has been used to charge everyone from sexters to sex workers to sauna attendees.

Just this year, more than 200 LGBT people were arrested under the pornography law.

Due to this unchallenged law, the narrow court victory, and the ongoing crackdown, many LGBT Indonesians are on edge once more after the celebratory moment last Thursday.

The eight people charged were among 141 gay men detained at a raid last May on the Atlantis Gym and Sauna, a move that drew criticism from the international human rights community.

The men were stripped and faced police questioning while naked. Most were released the next day.

Those charged included a director, strippers, a gym trainer, a receptionist and a security guard. Activists have called the pornography law used to prosecute them a serious incursion into civil liberties.

The extremely broad sweep of the laws means they have ensnared Indonesians ranging from the sauna patrons to the prominent hardline Islamist cleric Habib Rizieq Shihab.

Authorities put out an arrest warrant for him for allegedly exchanging explicit WhatsApp messages with a woman.

According to a 2013 Pew report, 93 percent of Indonesians believed homosexuality was not acceptable.

Last year, there was an acute gay panic in which, among other things, a transgender boarding school was shut down, a former minister called on the public to kill gay people, and the vice president personally attacked a United Nations program focused on LGBT rights.

President Joko “Jokowi” Widodo defended LGBT rights with a statement in October 2016, although he qualified it by saying, In Indonesia… Islam does not allow homosexuality. He has been mostly silent on the issue since then.

As long as policy holders and leaders continue to think in terms of norms and morality, the LGBT community will continue to face discrimination.

Whereas LGBT has nothing to do with morality. Crimes can be committed by anyone.

Homosexuality is legal in Indonesia except in the semi-autonomous Aceh province, which observes Sharia, or Islamic law.

Two young men were caned in Aceh after a group of vigilantes broke into their home and caught them having sex.