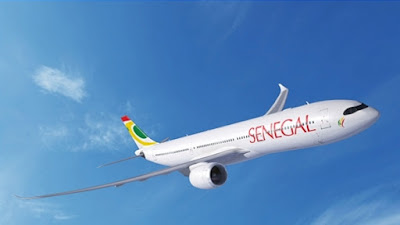 Air Senegal, the national carrier of Senegal, has signed a firm order for two A330neo aircraft, the new re-engined version of the best-selling A330 wide-body airliner.

The order follows the Memorandum of Understanding signed in November 2017 at the Dubai Airshow.

The agreement was signed in Dakar by Philippe Bohn, CEO Air Senegal and Fouad Attar, Head of Commercial Aircraft Airbus Africa Middle East, in the presence of the President of the French Republic, Emmanuel Macron on a state visit to Senegal, and Macky Sall, President of the Republic of Senegal.

These A330neo aircraft will contribute to developing our medium and long-haul network. It is important for us to begin our commercial activities with aircraft that are both reliable and economical, while offering our passengers unrivalled comfort.

Bohn said the two aircraft will contribute to developing the new carrier’s medium- and long-haul network.

It is important for us to begin our commercial activities with aircraft that are both reliable and economical, while offering our passengers unrivaled comfort.

We are pleased to count Air Senegal as a new customer. These A330neos will enable Air Senegal to benefit from unbeatable economics and to offer its passengers an outstanding level of comfort and travel experience in its market, said Fouad Attar Head of Commercial Aircraft Airbus Africa Middle East.

Launched in July 2014, the A330neo is the very latest generation in Airbus’ widebody family.

It builds on the proven economics, versatility and reliability of the A330 family, while reducing fuel consumption by about 25 percent per seat.

The A330neo is powered by Rolls-Royce’s latest-generation Trent 7000 engines and features a new larger wingspan with Sharklet wingtip devices.

The cabin also provides the comfort of the new Airspace amenities.

Air Senegal International was an airline with its head office in Dakar, Senegal.

It was a regional carrier operating a scheduled domestic network and regional flights to neighbouring countries.

The airline was established on 1 February 1971 as Air Senegal and started operations on 23 February 2001.

It was restructured as an international carrier following the acquisition of a majority stake by Royal Air Maroc in 2001.

It was part of Groupe Royal Air Maroc, who owned 51% of the company's shares, with 49% being held by the Senegalese government.

At one time the airline had its head office on the grounds of Dakar-Yoff-Leopold Sedar Senghor International Airport in Yoff, Senegal.

In 2007, the Senegalese government stated that effective 5 November 2006, it would purchase a further 26% of the airline, raising its stake to 75%.

The Senegalese government stated that support from Royal Air Maroc had shown its limitations, and that the airline needed to be recapitalised.

In late 2009, a new airline was announced to replace Air Senegal International.

The new airline is called Senegal Airlines with a fleet of 4 Airbus A320 aircraft and 2 Airbus A330 aircraft.

As of 2007, Air Senegal International operated scheduled passenger flights to the following destinations:

At May 2007, Air Senegal International had codeshare agreements with the following airlines: