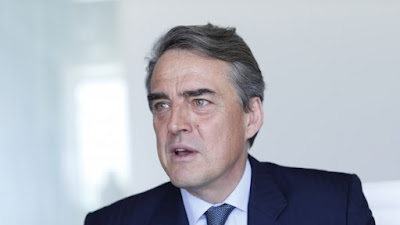 IATA DG& CEO Alexandre de Juniac
Big aircraft deals done at air shows will mean nothing if air traffic congestion and infrastructure challenges are not addressed, the head of IATA warned in a speech just before the opening of the Singapore Air Show.

In a keynote address Feb. 5 at the Singapore Airshow Aviation Leadership Summit, held the day before the air show’s opening, de Juniac said infrastructure was vital to the industry’s future, but in many key places was not being built fast enough to meet growing demand.

All the great plane deals that will be done at this air show will mean nothing if we don't have the capability to manage the traffic in the air and the airports at each end of the journey.

Infrastructure is vital to travel industry's future. Airline requirements are not that complicated.

Sufficient capacity to accommodate demand is required. Quality must be aligned with our technical and commercial needs. And the cost of the infrastructure must be affordable.

I believe, however, that we are headed for a crisis. First, infrastructure in general is not being built fast enough to meet growing demand. And there are worrying trends that are increasing costs.

That is because we have not found the correct regulatory framework. It must carefully balance the interests of the investors to turn a profit with the public interest for the airport to be a catalyst for economic growth.

De Juniac did single out some countries and their airports for praise in how they have managed growth.

Seoul’s Incheon Airport, he said has recently added runway and terminal capacity without raising charges for airlines and passengers and extended an airport charges discount introduced two years ago.

This sets a very positive example for other airports to follow. It also demonstrates great understanding of the role aviation plays in linking the Korean economy to economic opportunities globally.

The Singapore government is also showing great foresight with its expansion plans for Changi Airport, including Terminal 5.

But there are challenges. We must ensure the plans for T5 are robust enough to meet the high standards of airline operations and passenger convenience users of Changi Airport have come to expect.

We need to get the funding model right to avoid burdening the industry with extra costs. The prize to keep in sight is the airport’s contribution to Singapore’s overall economy.