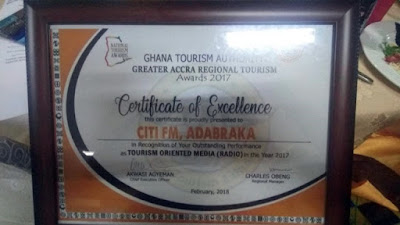 The Ghana Tourism Authority has adjudged Citi FM as Greater Accra’s Tourism-oriented Radio Station of the Year for 2017.

The award was presented to the station during the Greater Accra Regional Tourism Awards held last night [Friday], February 16, 2018 in Accra.

According to the Ghana Tourism Authority, Citi FM was awarded because of its efforts towards the growth of the tourism sector through its flagship road trip, the Heritage Caravan.

The Heritage Caravan is a 7-day trip that gives participants the opportunity to tour the ten regions of Ghana, combining the exciting journey with the unforgettable experience of visiting scenic locations in Ghana.

The Head of Events at Citi FM, Ranstina Lee Yankey told Citi News that the award is a recognition of the impact the Heritage Caravan is making in the country.

In 2017, patrons had a wonderful experience visiting places such as the Mole National Park, the Military Museum in Kumasi, the Slave Memorial at Assin Manso and the crocodile pond at Paga, among others.

A number of activities were also organized to spice up the trip which created an opportunity for patrons to bond and interact with other people.

This year’s trip promises to be even more exciting, as Citi FM has vowed to give patrons nothing but an unforgettable experience.

Other awards for Citi FM

This award is the latest in a series of accolades garnered by the station in recent months.

Citi FM was last weekend adjudged as the best media house in tax information dissemination for the year 2017.

The award, presented to the station by the Ghana Revenue Authority [GRA], was in recognition of its consistent discussions on tax issues which affected revenue mobilization for the year under review.

Last September, the station also picked up two awards at the Chartered Institute of Marketing Ghana (CIMG) for the year 2016.

The Citi Breakfast Show was adjudged the Radio Programme of the Year, citifmonline.com was named as the Emerging Digital Media Organization.

The awards handed to the station, according to CIMG, were in “recognition of your excellence in strategic marketing in the year 2016.”

That was the third time in four years the Citi Breakfast Show was adjudged the Radio Programme of the Year, a demonstration of the show’s consistency in delivery quality radio service to discerning listeners in the country.

The station in December 2017, also strengthened its position as one of Ghana’s leading radio brands as it bagged six awards at the Ghana Journalists Association [GJA] Awards at the Banquet Hall in Accra.

The station’s anti-galamsey campaign, ‘Stop Galamsey Now’, which was launched in 2017, came up for special mention at the ceremony, with the station picking up an award for its unrelenting fight against the menace.

Citi FM’s flagship programme, the Citi Breakfast Show, was named the best talkshow on radio, adding to the award it won at the Chartered Institute of Marketing Ghana (CIMG) awards in September this year.

Citi FM also picked up honours for Best Political Reporting as well as an Anti-Corruption Award for the station.

Host of the station’s news analysis programme, The Big Issue, Umaru Sanda Amadu, also picked up an award for his work in development journalism, which is contributing towards the attainments of the Sustainable Development Goals (SDG).

Another of the station’s reporters, Kojo Agyeman, who emerged first runner-up in the 2017 edition of the Ghana Mining Industry Awards, was also given a special award for his reports.