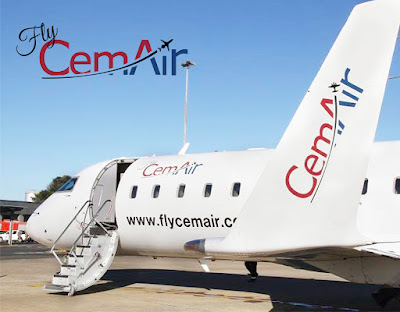 The South African Civil Aviation Authority (SACAA) has effectively grounded CemAir after it temporarily withdrew Certificates of Airworthiness (CoA) for 12 of the carrier’s aircraft.

CemAir's head office and engineering and maintenance facility are located in Hangar 5 OR Tambo International Airport, 25 km north-east of Johannesburg.

The fully equipped Flight Operations Control Centre is housed within the Head office and operates between 05h00 - 20h00 during the week and as required at weekends.

This facility is also the primary parts stores and logistics hub of the operation.

The reservations and ticket sales office is situated on the upper level below the viewing deck of Terminal B in the main airport complex, operating during normal office hours.

SACAA said in a statement it had taken the measure after its inspectors discovered during an audit that some of CemAir’s aircraft that were serviced at its Aircraft Maintenance Organisation (AMO) had been released back to service or cleared as airworthy by unqualified personnel.

This is in contravention of Part 43 and Part 121 of the South African Civil Aviation Regulations.

This practice poses an imminent danger for crew members, passengers, and the public at large, and has a direct impact on aviation safety, since the airworthiness status of the aircraft concerned cannot be confirmed and/or is questionable, South African Civil Aviation Authority (SACAA) declared.

The original directive was only due to be effective for a period of 24 hours and was to have expired early on the morning of Saturday, February 3.

However, the embargo has been rolled over twice since then.

CemAir says it has held constructive talks with SACAA to resolve the matter adding that both organizations would commit the necessary resources to expedite the action items and processes needed to achieve a resumption of service.

CemAir (Pty) Ltd is a privately owned airline operating in South Africa which services popular tourist destinations and important business towns and leases aircraft to other airlines across Africa and the Middle East. The airline is based in Johannesburg.

The company was formed in 2005 with the purpose of operating turboprop commuter aircraft.

CemAir has since evolved into a specialised aircraft leasing company offering turboprop and jet aircraft to a variety of operators throughout Sub-Saharan Africa, Asia and the Indian Ocean islands as well as a significant operator of scheduled regional services within South Africa.

The Air Service Licensing Council has issued the company with domestic and international licenses, for both scheduled and non-scheduled services.

In addition, CemAir holds approval from the SACAA for a Part 145 AMO (Approved Maintenance Organisation), which allows it to operate its own maintenance department.

The management structure conforms to the ICAO (International Civil Aviation Organisation) model and has six full-time post holders for complete oversight of flight operations and maintenance.

The duties and responsibilities of each position are documented with frequent internal and external audits to ensure compliance.

The company was previously a member of the Flight Safety Foundation and completed three successive BARS audits.

BARS (Basic Aviation Risk Standard) is a move towards audit standardization using a risk-based model based on best practice aviation safety principles and tailored to the needs of the resource sector, mainly the mining industry.

Two additional resource based audits have been successfully concluded by Hart Aviation to ensure that CemAir's operating and maintenance standards are acceptable to companies in the oil, gas and petroleum industry.

Based at OR Tambo International Airport, South Africa, a large portion of the fleet is deployed outside of South Africa and the aircraft periodically rotate back to base for selected inspections.

The main foreign deployments are to Mali in West Africa and Gaborone, Botswana as well as Juba, South Sudan.

Where needed in these locations, CemAir has created SACAA approved Line Stations to conduct flight operations and to carry out the required maintenance programs.

The company provides a web-based sales channel for the purchase of e-tickets for their domestic services within South Africa, as well as traditional ticket-purchasing options.

The company has operating and leasing experience throughout Africa and the Middle East, for mainly business, tourist and diplomatic services.

The maintenance arm of CemAir has been accredited by the South African Civil Aviation Authority with the necessary approval to include the maintenance of the Bombardier CRJ to be conducted along with the Dash 8 and Beechcraft 1900s at the OR Tambo base by the company's own technical staff.

This facility has the capability to carry out maintenance up to the C-check on the CRJ and all maintenance inspections on the Dash 8 and Beech 1900 including the changing of all major components such as engines, propellors etc.

Apart from specialised activities like painting or Non-Destructive Testing, all maintenance is carried out in-house.

CemAir suffered two hull losses in 2008 with aircraft leased out to 3rd parties, one in the Sudan and the other in the Democratic Republic of the Congo.

On 2 May 2008 a CemAir owned Beechcraft 1900, registered in Kenya and operated by Kenyan-based Flex Air Cargo was flying from Wau to Juba, Sudan when it crashed near Rumbek killing all nineteen passengers and two crew.

Among the passengers were two senior officials of the Sudan Peoples Liberation Army and their wives.

On 1 September 2008 an Air Serv leased nineteen passenger Beechcraft 1900C crashed in the Democratic Republic of the Congo, about 15 km northwest of Bukavu carrying two crew and fifteen passengers.

The aircraft was wet leased at the time and flown by crew from Cemair, which was then based at Lanseria International Airport, Johannesburg, South Africa.

The flight was arriving at Bukavu following technical service at N'Dolo Airport, Kinshasa.

The aircraft crashed into a mountainous ridge. Passengers included twelve Congolese, one French, one Indian, and one Canadian.