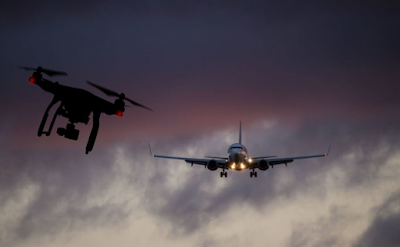 Pilots and air traffic controllers say New Zealand airports are already facing safety threats from drones, and more must be done to control their use.

London's Gatwick Airport was forced to close for more than 36 hours over the weekend, because someone was flying drones over the runway.

Sussex police have since made two arrests in connection with the disruption.

In New Zealand, those working in the airline industry warned the same thing could easily happen in this country.

The New Zealand Airline Pilots' Association said the Gatwick situation was an urgent wake-up call for this country to strengthen its own drone laws.

President Tim Robinson said the government must urgently update the laws, in the wake of the problems at Gatwick.

"It's the first time we've really seen a major interruption of this period of time, with drones," he said.

"There's going to be significant changes to law and drone detection technology to deal with a situation such as this."

He said the rules needed updating urgently, to protect the public.

"These aspects of drone usage need to be accelerated. We need to look at the rules more carefully, and the whole process of basically keeping up with the technology and the number currently in use."

Mr Robinson said drone users should be forced to register, and the penalties for flying the machines near airports should be increased.

The calls were backed by Airways New Zealand.

Its head of strategy Trent Fulcher said it got a couple of reports a week of drones being flown in and around airports - up from one a week, a year ago.

The biggest risk is that a drone comes in contact with an aircraft and there's a catastrophic event, and that's exactly what we're trying to prevent, he said.

He said Airways was working with the government to develop new guidelines and rules for flying drones.

We've been pushing quite hard for three changes, he said.

One is mandatory registration of all drones, secondly certification and training for pilots, and thirdly the ability to track drones either through software or hardware on the drone itself.

A 47-year-old man and 54-year-old woman from Crawley are being questioned over multiple drone sightings that brought Gatwick Airport to a standstill.

Flights were grounded for more than 36 hours when drones were first spotted close to the runway on Wednesday night.

The airport has since reopened and flights were operating on schedule, but there were still long queues and some knock-on delays, a spokesman said.

Police are searching a house in Crawley and the pair remain in custody.

They were arrested on Friday evening and were being questioned on suspicion of disrupting civil aviation to endanger or likely to endanger safety of operations or persons, Sussex Police said.

The force said it was deploying a range of tactics to prevent further incursions from drones following the arrests.

Strategies were in place in case any further unmanned aircraft were seen inside the airport perimeter, it added.

Supt James Collis said: We continue to urge the public, passengers and the wider community around Gatwick to be vigilant and support us by contacting us immediately if they believe they have any information that can help us in bringing those responsible to justice.

The airport said it aimed to run a full schedule of 757 flights on Saturday, carrying 124,484 passengers.

A Gatwick spokesman said: Many people will be due to fly today and there will be longer delays perhaps.

But broadly things are going in the right direction. By the end of the weekend, things should be back to normal.

Some people have suffered real losses by not getting where they want to go to be with family.

Her husband David joked the drama was a nice distraction from Brexit.

Passengers have been warned to expect some delays and cancellations and advised to check with their airline before travelling to the airport.

About 1000 aircraft were either cancelled or diverted and about 140,000 passengers disrupted during three days of disruption.

The airport was forced to shut its runway for spells on Wednesday and Friday and for all of Thursday.

The drones were first spotted at about 21:00 GMT on Wednesday.

Every time the airport sought to reopen the runway on Thursday, the drones returned.

Authorities finally regained control over the airfield after the Army deployed unidentified military technology to guard the area, reassuring the airport that it was safe enough to fly from about 06:00 on Friday.

The Israeli-developed Drone Dome system, which can detect drones using radar, is believed to have been used. It can jam communications between the drone and its operator, enabling authorities to take control of and land the device.

But John Murray, professor of robotics and autonomous systems at the University of Hull, says the problem with this system was you can find the drone but not the person operating it.

You can take the drone out of the sky but you won't capture the person and that's what you want to do.

You can get a second-hand drone for between £200 and £300 so if you take it down, they can just go out and buy another one, he said.

No group has claimed responsibility for the disruption.

The drones caused misery for travellers, with many sleeping on the airport floor as they searched for alternative routes to holidays and Christmas family gatherings.

Thousands of passengers returning to the UK were either stranded abroad or diverted to other UK airports.

A handful of flights due to arrive into Gatwick on Saturday were cancelled, according to the airport's website, including an easyJet service from Milan-Linate and a TUI flight from Bridgetown, Barbados.

A Gatwick spokesman said: Safety is Gatwick's top priority and we are grateful for passengers' continued patience as we work to get them to their final destination in time for Christmas.