Enjoy Lemongrass In A Drink, Food Or As An Insect Repellent 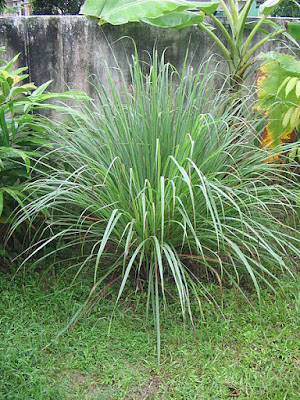 Cymbopogon, better known as lemongrass, is a genus of Asian, African, Australian, and tropical island plants in the grass family.

Some species mostly Cymbopogon citratus are commonly cultivated as culinary and medicinal herbs because of their scent, resembling that of lemons or Citrus limon. Common names include lemon grass, barbed wire grass, silky heads, citronella grass, cha de Dartigalongue, fever grass, tanglad, hierba Luisa, or gavati chahapati, amongst many others.

Lemongrass is widely used as a culinary herb in Asian cuisines and also as a medicinal herb in India. It has a subtle citrus flavor and can be dried and powdered, or used fresh. It is commonly used in teas, soups, and curries. It is also suitable for use with poultry, fish, beef, and seafood.

Lemongrass is a plant. The leaves and the oil are used to make medicine.

Lemongrass is commonly taken orally, applied directly to the skin, or inhaled as aromatherapy for many different conditions. But there is limited scientific research to support any of its common uses.

In food and beverages, lemongrass is used as a flavoring. For example, lemongrass leaves are commonly used as lemon flavoring in herbal teas.

In manufacturing, lemongrass is used as a fragrance in doedorants, soaps, and cosmetics. Lemongrass is also used in making vitamin A and natural citral.

Lemongrass might help prevent the growth of some bacteria and yeast. Lemongrass also contains substances that are thought to relieve pain and swelling, reduce fever, improve levels of sugar and cholesterol in the blood, stimulate the uterus and menstrual flow, and have antioxidant properties.

Despite its ability to repel some insects, such as mosquitoes, its oil is commonly used as a lure to attract honey bees. Lemongrass works conveniently as well as the pheromone created by the honeybee's Nasonov gland, also known as attractant pheromones.

Because of this, lemongrass oil can be used as a lure when trapping swarms or attempting to draw the attention of hived bees.

Citronella grass such as Cymbopogon nardus and Cymbopogon winterianus grow to about 2 m (6.6 ft) and have magenta-colored base stems. These species are used for the production of citronella oil, which is used in soaps, as an insect repellent most especially mosquitoes in insect sprays and candles, and in aromatherapy.

The principal chemical constituents of citronella, geraniol and citronellol, are antiseptics, hence their use in household disinfectants and soaps. Besides oil production, citronella grass is also used for culinary purposes, as a flavoring.

Citronella is usually planted in home gardens to ward off insects such as whitefly adults. Its cultivation enables growing some vegetables e.g. tomatoes and broccoli without applying pesticides. Intercropping should include physical barriers, for citronella roots can take over the field.

Lemongrass oil, used as a pesticide and preservative, is put on the ancient palm-leaf manuscripts found in India as a preservative.

It is used at the Oriental Research Institute Mysore, the French Institute of Pondicherry, the Association for the Preservation of the Saint Thomas Christian Heritage in Kerala, and many other manuscript collections in India.

The oil also injects natural fluidity into the brittle palm leaves, and the hydrophobic nature of the oil keeps the manuscripts dry so the text is not lost to decay due to humidity.

While both can be used interchangeably, C. citratus is more suitable for cooking. In India, C. citratus is used both as a medical herb and in perfumes. C. citratus is consumed as a tea for anxiety in Brazilian folk medicine, but a study in humans found no effect. The tea caused a recurrence of contact dermatitis in one case.

Lemongrass is also used as an addition to tea, and in preparations such as kadha, which is a traditional herbal brew used in Ayurvedic medicine.

Many people believe that lemongrass tea offers multiple health benefits, but researchers have not yet conducted enough large-scale studies to prove these benefits.

Doctors do know that the tea can help fight against free radicals, thus reducing the incidence of inflammation in the body. Lemongrass contains the inflammation-fighting compounds chlorogenic acid, isoorientin, and swertiajaponin.

Inflammation is a factor in many adverse health conditions, including pain and heart disease. As such, lemongrass tea could be a beneficial drink for people to incorporate into their diet.

According to the Memorial Sloan Kettering Cancer Center, smelling lemongrass may help people with anxiety. Although some people already inhale lemongrass essential oil to relieve stress and anxiety, researchers still need more evidence to be able to confirm this benefit.

According to an article in the Journal of Advanced Pharmaceutical Technology & Research, consuming lemongrass extracts appears to lower cholesterol in animals.

The study notes that the reaction is dose-dependent. This means that larger quantities of lemongrass might lower cholesterol further.

According to the Memorial Sloan Kettering Cancer Center, study results suggest that lemongrass may have some infection-preventing capabilities.

For example, the herb seems to reduce the incidence of thrush, a fungal infection that commonly affects people with weakened immune systems, such as those with HIV.

In many countries where the lemongrass plant is native to the area, people will take the lemongrass stalks and chew on them as a way to improve dental health and keep the mouth feeling clean.

The Food Chemistry journal published a study confirming these findings. The authors looked at 12 herbs and found that lemongrass herbal extracts were one of the most potent inhibitors of bacterial growth in lab samples. They used bacteria that can cause cavities in the mouth, including Streptococcus sanguinis.

According to one study, lemongrass may be able to block pain. This means that drinking lemongrass tea could potentially help to prevent a person from sensing pain.

The results of a 2015 study suggest that drinking lemongrass tea infusions daily for 30 days can increase hemoglobin concentration, packed cell volume, and red blood cell count in the body.

The researchers took blood tests from 105 human subjects at the start, and then at 10 and 30 days into the study. They concluded that drinking lemongrass tea boosts the formation of red blood cells.

While they did not identify precisely how lemongrass does this, they did suggest that the tea's antioxidant properties could play a role.

Drinking lemongrass tea can have diuretic effects, which means that it stimulates the kidneys to release more urine than usual.

According to a small-scale study in the Journal of Renal Nutrition, drinking lemongrass tea increases urine output more than other beverages.

This diuretic effect on the body can be beneficial in cases where water retention leads to bloating. This is a common symptom of premenstrual syndrome (PMS).

It is possible to make lemongrass tea at home. After purchasing the stalks at a grocery store or herbalist, people can take the following steps to brew their tea:

- boil a cup of water

- pour the boiling water over the lemongrass stalks to steep

- leave the stalks in the water for at least 5 minutes

- strain the liquid from the stalks and pour into a teacup

The tea should have a fresh, citrusy taste. A person should start with one cup of lemongrass tea per day, then add more to their diet over the next days if they wish to.

Lemongrass tea can be a delicious beverage that also offers health benefits.

While most of the studies to date on lemongrass tea are small-scale or lab-based, results show that lemongrass tea can help to improve oral health, lower cholesterol, and relieve bloating.

In addition to drinking lemongrass as a tea, people can add the herb into dishes such as soups and stir fries.