PHILIPPINES: Government To Tackle Manila Bay, A Magnified Cesspool, The Same Way It Did With Boracay 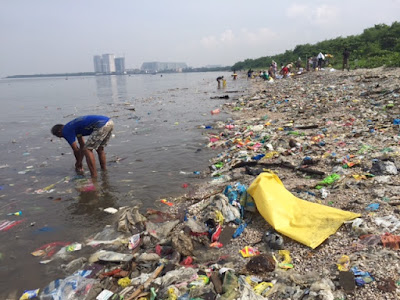 Government,in the same way it did to rehabilitate Boracay, will begin next month to make Manila Bay safe.

The bay is known for the spectacular bright colours during sunsets.

It is known for its noxious garbage and heavily polluted water.

Swimming in Manila Bay is like drinking another persons urine, and that is how dirty it is.

A government task force will soon begin an operation by shutting down factories, oil depots and other establishments dumping untreated wastewater and toxic chemicals into Manila Bay.

Informal settlers living along the shoreline will also have to be relocated.

The environment department and 15 other government agencies are already putting the final touches on a master plan to coordinate all efforts to rehabilitate Manila Bay.

The government shut down Boracay, famed for its powdery white beaches and shallow azure water, in April to fix sewage and environment-related problems that led to what President Rodrigo Duterte described as the island's degradation into a cesspool.

"You go into the water, it's smelly. Smells of what? Shit," Mr Duterte had remarked.

Over six months, the government undertook a massive cleanup of Boracay.

Illegal pipes that dumped untreated sewage straight into the sea were removed. More sewage plants were built and others refurbished.

Buildings were bulldozed, and businesses pushed back to create a 30m buffer zone from the waterline. The island was reopened in October.

Manila Bay presents an altogether different challenge, in terms of scale and complexity.

Boracay, for one, has a land area of just 10 sq km. Yet Manila Bay is a giant waste dump for roughly 13 million people living in the capital, according to advocacy group Greenpeace, which also called it a hideous cocktail of sewage, toxic industrial wastes, oil spills, leachate from garbage dumps, and run-offs from farm chemicals.

Greenpeace estimates that the degradation of the bay itself and surrounding coastal areas lead to at least 4 billion pesos (S$100 million) in damages each year, including costs arising from waterborne diseases.

While we welcome the pronouncement to clean up Manila Bay, we have yet to see a clear plan on how government will do it in a more holistic manner. The degradation and pollution of Manila Bay is a systemic problem, and change has to be addressed at source.

Corporations would have to be held responsible for producing excessive amounts of single-use plastics.

Greenpeace this year set off on a campaign to shame consumer giants to force them to find environment-friendly alternatives to cheap, disposable plastic products.

A week-long cleanup of a small marine sanctuary along Manila Bay in September yielded more than 54,200 pieces, or about 1,040 kg, of plastic waste. There were also a good amount of nappies, sanitary napkins and glass.

A brand audit showed Nestle, Unilever, and Procter & Gamble were among the worst offenders.

The government could also have to strictly implement the law on ecological solid waste management, and compel companies to disclose their use and discharge of chemicals and other wastes.

It is a step in the right direction, albeit delayed, and must be done with full participation of impacted communities who get their living from Manila Bay. A more comprehensive road map must be in place involving all stakeholders.

Located in the heart of the country’s capital city, the DENR announced – or should we say threatened – to undertake a massive rehabilitation of the Manila Bay of Boracay-scale.

It took almost six months during which the government closed down for rehabilitation the world-renowned Boracay island resort. It was re-opened back to business and tourists only last October.

In 2008, the High Court issued a continuing writ of mandamus, ordering 13 government agencies to clean up Manila Bay and restore its water quality to Class SB or safe for recreational activities such as swimming.

Class SB waters are also suitable for commercial propagation of shellfish and as spawning areas for milkfish and other similar species.

Manila Bay is a natural harbour which serves the Port of Manila on Luzon, in the Philippines. Strategically located around the capital city of the Philippines, Manila Bay facilitated commerce and trade between the Philippines and its neighbouring countries, becoming the gateway for socio-economic development even prior to Spanish occupation.

Manila Bay drains approximately 17,000 km2 (6,563.7 sq mi) of watershed area, with the Pampanga River contributing about 49% of the freshwater influx.

A total of 19,139 birds belonging to 330 families and 99 species were observed at various monitoring sites along the bay area. The endangered Chinese Egret or Egretta eulophotes and Black-winged cuckoo-shrike were sighted in the area.

A large number of migratory birds, catfish and mackerels were once abundant in these waters. Their decline ushered in the appearance of squid, shrimp, and small pelagic species such as herrings and anchovies.

The mangrove ecosystem around Manila Bay has both ecological and socioeconomic uses with its association of unique plant and animal species. Of the original 54,000 hectares of mangroves existing at the turn of the 20th century, only 794 hectares are remaining as recorded in 1995.

A few of the mangrove swamps remaining in Pampanga Bay are of considerable value for research and conservation education. As natural habitats, mangroves considerably help in acting as a protective buffer against cyclones and storms.

Plantations of Cocos nucifera (coconut palm) co-exists with the mangroves found in these areas.

Covering about 4,600 hectares, wetlands around Manila Bay are useful in:

- providing food and habitat for fish, shorebirds and wildlife;

- maintaining and improving water quality of rivers, lakes and estuaries,

- acting as reservoir for watersheds, and

Mudflats, sand flats, swamps, beaches and rocky shores form part of the wetlands in Manila Bay. Found mostly along the coast of Bataan and Pampanga, mudflats are suitable habitats for shellfish.

Contributing to the balanced functioning of the ecosystem around Manila Bay, coral reefs in the area provide sanctuary for fishes. Consequently, its decline through the years has directly affected the fish yield.

As a diverse ecosystem, seagrass beds provide shelter for fishes and other marine life forms. Like the coral reefs, most of the seagrass beds in Manila Bay are found near its mouth, most notably in the areas of Malolos, Orion, Mariveles, and Corregidor Island.

Within the watershed of Manila Bay upland forests abound which are sources of food, timber, fuel wood and other products, as well as habitats for wildlife. These forests provide protection from soil erosion and help maintain the water levels and water quality in rivers and streams.

Largely intended for use in human settlement and industrial development, land reclamation projects contributed to the reduction of mangroves around the area, as well as significant reduction in Metro Manila's shoreline. From 1944 to 1991, approximately 600 m of shoreline have been reclaimed in the northern part.

In 2009, the Pambansang Lakas ng Kilusang Mamamalakaya ng Pilipinas (Pamalakaya) said that there are 7,000 hectares of foreshore areas in Cavite and 5,000 hectares of shallow coastal waters to expand Sangley Point naval base as part of reclamation projects which are mostly funded by foreign investors.

Conversion of mangrove and mudflat areas into fishponds have impacted the physical features of the bay whereby what used to be irregular shoreline in 1944 has become more linear by 1977. Shoreline retreat continued as man-made structures such as fish pens occupied the coastal areas, with progradation dominant from 1977 to 1991.

Most area of the bay, except those near the ports, are largely used as a major fishing ground, with fisheries and aquaculture as the dominant source of livelihood for the inhabitants in the coastal areas.

From 1990, approximately 1,200 hectares of mangroves were cleared, with the land converted for aquaculture or used as salt beds. In 1993 much of the fisheries resources steadily declined due to over-fishing and over-harvesting.

Successive changes in and around Manila Bay are largely due to the intertwining impacts of continued industrialization, unrelenting increase in population, and the incessant human activities catering to livelihood and habitation.

These factors are directly degrading the overall environment of Manila Bay and these impacts are manifested in the continued deterioration of the water quality within the bay.

Several industries operate along the bay in the highly urbanized Metro Manila area, while there are shipyard facilities in Cavite and in Bataan, several more heavy industries, refineries and a power plant are present.

At the shipping ports and ferry terminals, an average of 30,000 ships arrive and depart annually to transport passengers, manufactured goods and raw materials.

Industrial waste discharges and discharges of untreated domestic wastes from drainage and sewer outlets have contributed to the severe decline in the quality of water and sediments in the bay as well as impacted on the existing marine habitats.

With the presence of ports, sea-based sources of pollution around the bay are from ships and motorized boats. Twelve oil spills were recorded in 1995, but it was in 1999 where the highest total volume of oil spill occurred in the Manila South Harbor and Limay, Bataan.

Increased presence of oil and grease in the waters are attributed to maritime activities at the harbors, together with the presence of oil terminals and the discharges from industries. These factors directly impacted the health of Manila Bay's waters.

Aside from oil spills, trace metals such as copper, cadmium and zinc at the surface of the water were found at the bay coming from sea-based and land-based e.g., domestic sewage, industrial effluents, runoff, combustion emissions, and mining operations sources.

In 1996, concentrations of 16 commonly used pesticides in surface sediment was found including dichloro-diphenyl-trichloroethane (DDT). Polycyclic aromatic hydrocarbons (PAH) found in Manila Bay sediments have been influenced by human activities.

Pesticide residues from rice paddy water draining into irrigation canals, which later on empty into river systems and eventually flowing into the surrounding lakes reaches the waters of Manila Bay.

Compounds from these pesticide residues find themselves in food items with metamidophos, endosulfan, chlorpyrifos and diazinon among the common contaminants. While chronic toxic effects on inhabitants of the bay are not found, impairment of marine biota were more evident.

The increase in the nutrient concentration and presence of nitrate, ammonia and phosphate in the bay,from the '80s, through to the '90s and beyond are not only attributed to agricultural runoff and river discharges but also on fertilizers from fishponds.