A city in Hebei province has canceled Christmas. Langfang, which borders on Southeast Beijing, has banned stores from putting up decorations like Christmas trees and Santas, while also prohibiting the sale of Christmas decorations and from holding outdoor Christmas-related events.

This is according to a paper circulated by the city’s Urban Management Bureau on Saturday, December 15. While the ban seems to be an outright prohibition of Christmas in the city, representatives at the Urban Management Bureau have stated that it comes as the city gears up to take part in the National Civilized Cities competition.

The notice additionally states that religious events taking place in parks, squares and other public venues will be prohibited, while also encouraging people to report any such gatherings to officials. No specific religion was mentioned in the statement.

Street hawkers selling goods such as Christmas apples, socks and other ornaments will also be punished. According to the notice, all law enforcement staff will be on duty on December 23, 24 and 25, to ensure that none of these regulations are flouted. 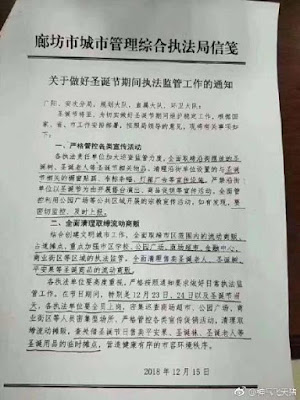 The above notice translates as:

“Each law enforcement unit should enhance supervisions and ban Christmas decorations on the streets in their entirety, including Christmas trees, Santas and other related objects. Remove Christmas-related stickers on shop windows, banners, decorative lightings, billboards and other publicity apparatuses. Shops are strictly prohibited from staging promotional shows during Christmas and law enforcement should fully control religious events taking place in parks, squares and other public venues. If discovered, they should be closely monitored and reported to superiors. During the holidays, especially on the 23rd, 24th and Christmas Day, all staff at city law enforcement units should be on duty. They are responsible for investigating and penalizing street hawkers who sell Christmas Eve apples, Christmas socks, Santa Claus-like goods, etc.”

Sanhe City and Dachang Hui County are now conurbated with Beijing, so that they form part of the same built-up area. Langfang is the smallest prefecture-level city of Hebei Province by land area.

Considering Langfang's position between these two prominent cities, it is a relatively green city. Every 300 to 500 m (980 to 1,640 ft) along the city's major streets are parks where local people stroll and take exercise. Langfang's five-kilometer long pedestrian street is now the longest in China.

On the other hand, air pollution is a severe problem and in 2013 it was ranked among the 10 worst cities in China for air pollution, along with 6 other cities in Hebei including Xingtai, Shijiazhuang, Baoding, Handan, Hengshui and Tangshan, are among China's 10 most polluted cities.

Langfang's economy emphasizes computers and technology and manufacturing. To that effect Langfang is home to an export processing zone, an area for factories, and the Oriental University City, a 4-billion yuan investment that began construction in 1999, where some 30 universities enroll about 50,000 students.

There are two national oil and gas companies based in Langfang. The China Petroleum Pipeline Bureau, the primary builder of pipelines in China, and the ENN Group, a natural gas company, are both based in the city.

Langfang does not have its own port or airport, but is well connected. It is only a one-hour drive from Beijing Capital International Airport and the Tianjin New Port. Langfang Railway Station is situated on the Beijing–Harbin Railway.