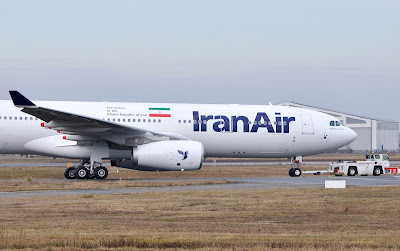 Airlines were facing low profitability even before returning sanctions took a toll on the country's currency.

Iranians reacted with anger and frustration to the news that British Airways will suspend its service to Iran from September 23. Soon after, news came that Air France would axe its service on September 18.

Some Iranians expressed a feeling of being imprisoned in the country as they learned that international airlines were leaving Iran.

Hamid Baeidinejad, Iran’s Ambassador to the United Kingdom, responded to British Airway’s withdrawal more pragmatically, noting his hope that Iran Air, with its three weekly direct flights to London, can seize the opportunity and fill the gap.

The news appears to reflect further instances of multinational companies withdrawing from Iran in the face of returning US sanctions while bowing to the political pressure exerted by the Trump administration.

Israeli Prime Minister Benyamin Netanyahu took this view, stating about the withdrawals, That’s good. More should follow, more will follow, because Iran should not be rewarded for its aggression in the region.

But the airlines have communicated that commercial and not political factors were paramount in the decision to withdraw. The British Airways statement described their London to Tehran route as currently not commercially viable.

The executive’s account provides a more precise picture of why numerous airlines have determined that flying to Tehran is no longer commercially viable.

These claims are not a fig leaf for politically motivated decisions, nor attempts to downplay legal barriers posed by returning sanctions which are minimal.

Instead, over the last few months, larger economic forces arose that made routes operating at high passenger loads unattractive, at least relative to the option of redeploying aircraft other routes worldwide.

The influx of international carriers into Iran led to increased competition. Such competition depressed airfares in the short term. Airlines knew that it would be difficult to become profitable quickly and had expected to wait at least two years in order to break even, the executive explains. But by early 2018, the break-even point remained out of reach.

International carriers had expected that the growth in business and tourist travel to and from Iran would boost demand and help drive airfares upward over time.

But the stalling post-sanctions economic recovery, slowed in part by President Trump’s decision to decertify the Iran nuclear deal in October as well as domestic factors, meant that the projected growth in passenger numbers was failing to materialize.

In response, as the first quarter of this year came to a close, most international carriers active in Iran began to plan reductions in their service in order to better match supply with demand.

Austrian Airlines pursued a realignment of the airline’s portfolio by suspending flights to Esfahan and Shiraz. KLM planned to suspend its flights and Air France opted to run a reduced service after switching the operation of the Paris-Tehran route to Joon, a subsidiary.

British Airways likewise planned to reduce the frequency of its flights.

These adjustments should have enabled the international airlines to increase airfares in the market by addressing oversupply, bringing profitability back within reach for the sector.

But the adjustments coincided with President Trump’s withdrawal from the Iran nuclear deal and an acceleration in Iran’s currency crisis.

The falling value of the rial had two important effects on international airlines. First, it significantly decreased demand. Not only were airfares more expensive as the purchasing power of the rial declined, but Iranians were also struggling to get reliable access to the hard currency they need in order to spend freely when abroad.

But even if higher fares could protect revenues from devaluation in the short-term, the airlines faced long-standing issues around repatriation of revenues.

Last week, the Iranian Civil Aviation Organization announced that international airlines would need to buy euros at the market rate, contradicting an earlier assurance provided by the Central Bank of Iran that foreign currency would be available to the airlines at the lower government exchange rate.

The executive notes that a lack of clear communication from the central bank and aviation authority proved one of the most frustrating aspects of the whole episode.

In any case, airlines struggled to convert their rial holdings into foreign currency at whatever the rate.

The airlines executive believes that when airlines sought to convert their rial holdings in accounts at banks such as Saman Bank and Parsian Bank, the central bank failed to make the foreign currency available because they either did not have sufficient foreign currency on hand or were opting to build up reserves for more critical industries like the pharmaceutical sector.

As rial-denominated revenues languished in Iran, airlines saw their losses mount, and the routes were no longer commercially viable.

For context, the executive impresses that business is good in the aviation industry worldwide right now and that for airline executive committees dealing with the headache of operating in Iran, the option to simply reassign an aircraft and flight crew to another more profitable route became increasingly appealing.

For now, Lufthansa and Alitalia are continuing their services to Iran. For these European holdouts, the withdrawal of their competitors could offer a reprieve, reducing competition and perhaps helping to stabilize airfares.

European governments, which have been actively involved in the challenges faced by their national carriers since January, remain politically supportive. Of course, Iran Air will benefit.

Iran’s national carrier announced route expansions in May in an effort to win back market share from the international players.

No doubt, sanctions contributed to the withdrawal of international airlines out of Iran, but not for the political or legal reasons readily assumed.

Rather, international airlines would have persisted in their service to Iranian destinations, emboldened by political support from European governments, had it not been for the intractable issues surrounding commercial viability.

While the withdrawal from Iran essentially came down to fundamental commercial calculations, the executive makes sure to relay that the decision to cease operating in Iran was nonetheless difficult to make.

In his words, nothing was more painful than how deeply unfair the whole situation is for our team members in Iran. Like many other young and talented Iranians, those let go by the international carriers will be wondering what next.