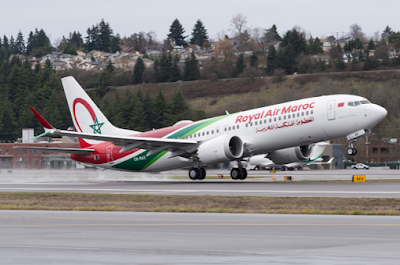 Boeing on December 21, 2018 delivered the first 737 MAX (CN-MAX, msn 60008) to Royal Air Maroc, which plans to use the fuel-efficient, longer-range version of the popular 737 jet to expand and modernize its fleet.

Morocco’s flag carrier – which welcomed its first 787-9 Dreamliner last week – will take delivery of three more 737 MAX 8s and three more 787-9s over the next few months as part of its strategic plan to strengthen its operations.

The 737 MAX 8 airplanes will build on the success of Royal Air Maroc’s fleet of Next-Generations 737s. The MAX incorporates the latest technology CFM International LEAP-1B engines, Advanced Technology winglets, and other airframe enhancements to improve performance and reduce operating costs. It also integrates engine technology to reduce the operational noise footprint of the airplane.

Boeing has also partnered with the industrial sector in Morocco, supporting the development of the kingdom’s aviation industry through initiatives such as the joint venture MATIS Aerospace that specializes in producing wire bundles and wire harnesses for airplanes.

Boeing is also helping to educate local youth through partnerships with EFE-Morocco and the INJAZ Al-Maghrib association.