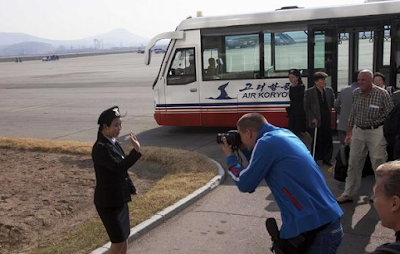 Despite its image of being secretive, North Korea invites foreigners to discover its attractions. But traveling as tourists comes with strings attached, as special guides shadow their every step.

Curious to witness a nation that is consistently in the news for all the wrong reasons, record numbers of tourists are booking visits to North Korea, although defectors who have fled a regime that has imprisoned their families and friends say they wish travelers would choose a different destination.

The vast majority of the tourists are from neighboring China, there has been a sharp increase in arrivals from China in the first half of the year.

In the first three months of the year, as many as 2,000 people were crossing the border into North Korea from China.

With limited tourist infrastructure such as hotels and restaurants, the North Korean government in March announced that a limit on foreign arrivals would be set at 1,000 people per day.

In total, around 100,000 tourists visited North Korea last year, all members of groups that were carefully taken to sites that the regime of Kim Jong Un wanted them to see.

Those sites included the vast expanse of Kim Il Sung Square, usually seen on television with hordes of soldiers marching in long parades, as well as the Tower of Juche and a replica of the mountain hut in which North Koreans are taught Kim Jung Un, the father of the present dictator, was born.

Another major attraction is the Mass Games, in which thousands of children perform tightly choreographed dances and performances in the Rungrado 1st of May Stadium with 114,000 seats, the largest stadium in the world, in praise of the nation and their leaders.

Performances for this year have been abruptly halted after Kim expressed his displeasure and it is not clear when they might resume but still the tourists come.

Tourists should not set foot in North Korea, a North Korean defector said. Anyone who goes there is being manipulated by the regime and told only what the North wants them to hear, he added.

Unfortunately, if they have no other sources of information on what life is really like in North Korea, and they have no chance to see how miserable the lives of ordinary people are, then they will come out thinking that North Korea is a safe and happy place, another South Korea-based defector said. It is not safe and it is not happy.

This defector fled North Korea in 2008 after becoming disillusioned with the regime. His father was a political prisoner and was taken from the family home when he was 9. One of his older sisters has also been sent to a political prison and he does not know if she is dead or alive, he said.

He believes his other sister is alive and still working as a doctor in the North, but he has made no effort to contact her in several years because it would be dangerous for her if the North's state security officials discovered that she was communicating with someone outside the country.

Visitors to North Korea are being told about the 'victory of the Juche ideology' of the country. They are being told of the greatness of the Kim family, he said. I know this because it is exactly what I was taught when I was at school. But it is a lie.

Another defector who defected from the North in 1985 and took two years to reach safely in South Korea, says Pyongyang has two prime motivations for attracting more foreign tourists; one is to feed them propaganda, the other is to earn hard currency, he said.

Since the United Nations introduced sanctions, they have been really struggling, he says. Tourism is one of the few ways that they still have of making any money.

The money that tourists spend to go there, and anything that they use when they are in the North, goes directly into Kim's political funds and is used to buy the loyalty of the political factions and the military leaders that he needs to keep happy to stay in power, said Heo, who is now chairman of the Seoul-based Committee for the Democratization of North Korea.

Tourism is helping to keep the North Korean regime alive and I believe it should also come under the international sanctions to stop that money going to Kim.

Tourism does not support the North Korean regime and the people who visit the North are not expressing their support, said Simon Cockerell, general manager of a North Korea travel agency, Koryo Tours.

In the same way, no travel company that is taking visitors to China would say that their travelers were supporting the Chinese government.

Cockerell also denied that money from the tourism sector is funneled to the national government, pointing out that the hotels, restaurants and their other travel partners in the North all have to pay their own staff and have other overheads.

Most North Koreans never have the opportunity to interact with a foreigner. These are people whose only understanding of foreigners is what they are told by their own government. So when they do meet foreigners, they have a very different perspective.

And when they realize that everything that the state has told them previously was incorrect, he said, they then begin to question other truths that they have been fed all their lives.