UNITED KINGDOM: Passengers Stranded At Heathrow Airport Just To Wait For Their Luggage 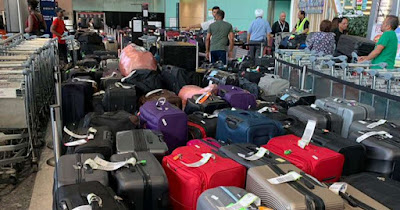 Desperate air travellers are still waiting to be reunited with their luggage after technical issues at London Heathrow Airport forced them to fly without their bags.

Passengers were confronted by staggering piles of suitcases at Terminal Two last night, after a major glitch with the airport’s baggage handling system.

A day later, scores of people still have no updates on their belongings, with some complaining of feeling helpless and cheated at the airport's alleged communication failings.

One passenger said it wasn’t until he and his fellow passengers had boarded their flight to Oslo that they were told they would be travelling without their luggage.

The woman at the check-in desk told passengers there was a problem with their computer system, but reassured us everyone’s suitcases would still make it on.

So he turfed out everything from my suitcase that wouldn’t make it through security and manually gave it to staff at the gate.

he added, i think there were about 10-15 suitcases that made it onto a flight of around 240 people.

Another passenger said she was continuing to demand updates on her belongings 16 hours after landing.

“No one’s telling me if I’m going to get my bags today and the tracking system just says tracing continues. Please check back later,she said.

My flight landed at 8.50pm but they made us wait till midnight, just to get the phone number for the incident report.

People at the check-in area at Terminal Two should have told us there was a crisis – I wouldn’t have checked my bag.

I have a conference today and I don’t have anything to wear, but the worst part is I don’t know where my bag is.

A spokesperson for Heathrow Airport acknowledged their had been an issue but said it was working closely with its airline partners to reunite passengers with their luggage.

Yesterday there was a technical issue in Terminal 2 preventing some bags from being input into the system.

Our engineers quickly worked to resolve the issue and the system is working as normal today.

We are now working closely with our airline partners to reunite passengers with their luggage as soon as possible and those affected should contact their airlines for more information.

It comes after thousands of passengers suffered chaos at the Terminal Five bag drop on Friday, with many forced to miss their flights due to queues of up to two hours.

However, Heathrow travellers have received some good news , as strikes planned for the airport this weekend have been suspended, according to union Unite.