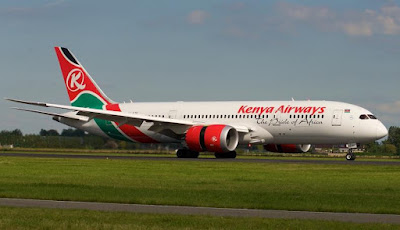 The body of a man fell from a Kenya Airways plane into a London garden before the plane landed at Heathrow Airport.

The body landed in a garden in Lambeth, South London, at 3.42pm on June 30, according to a statement from airline operator Kenya Airways.

It is believed the man was hiding in the undercarriage of the aircraft. The owner of the garden called police and they have linked it with the Kenya Airways flight from Nairobi to Heathrow.

A statement from Kenya Airways said: “The Metropolitan Police in London have informed Kenya Airways of a body that fell off the landing gear of its aircraft moments before the flight landed in London Heathrow Airport.

On June 30 at 15:42hrs (UK time) a body of a yet to be in deified male stowaway landed in a garden in the Borough of Lambeth, South London, suggesting the stowaway was hidden in the undercarriage of the aircraft.

The police have already been in contact with the Kenya High Commission to help identify and name the person.

The air craft was inspected and no damage reported. It was also cleared for operation.

The Met Police added they are still trying to identify the man.

A bag, water and some food were also discovered in the landing gear compartment once it landed at the airport.

A statement said: Police were called at 15:39hrs on Sunday, 30 June to a residential address after a body was discovered in a garden.

Officers attended with the London Ambulance Service. The body of a person, believed to be a man was found.

A post-mortem examination will be carried out in due course. Police are working to establish the man's identity.

A crime scene was put in place but has since been closed.

The death is not being treated as suspicious. Enquiries are underway to establish the full circumstances.

The 4,250-mile trip from Nairobi to Heathrow takes around eight hours and 50 minutes.

One witness recalled hearing an almighty bang while she was in her garden.

She said: At first I thought it was some scaffolding falling down and thought nothing more about it.

My husband decided to see what was going on and went upstairs to take a look.

He didn't tell me what had happened at first. He was obviously quite shocked and went out into the street where my neighbour was standing on the phone to the police.

He was really shaken up. He'd been in the garden when it happened and the body must have landed so close to where he was.

My husband came back in and I asked him what was going on and he said ''Haven't you seen the man? - the man who fell from the sky?'

I wondered what he was talking about and went up to see for myself and there in the middle of the lawn was a body of a man.