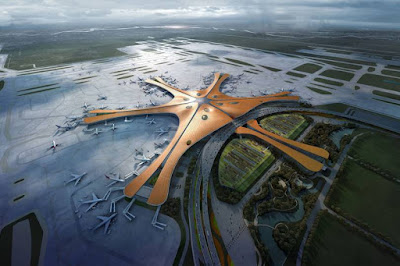 Construction of China’s mega-airport has finally been completed. When it opens for business on September 30, Beijing Daxing International Airport will be the world’s largest single-terminal airport covering an area of over 1.4 million square metres – that’s more than double the size of Heathrow’s four terminals combined.

With a total of seven runways planned, the new airport will ultimately handle over 100m passengers each year and rub shoulders with Atlanta International in the US as the world’s busiest.

The total budget for the airport, which took just under five years to build, came to a total of £9 billion. To put that into perspective, building a third runway at Heathrow is projected to cost £14bn, and won't be operational until 2026 at the earliest.

The Chinese capital already has an enormous airport in the northeast. Ahead of the Olympics in 2008, Beijing Capital International Airport (PEK) opened a third £3bn terminal to bump up the total capacity to 85m passengers a year.

But the city has seen a strong surge in air traffic growth and Capital airport has become overcrowded since 2016, exceeding the 100 million mark in 2018.

Located 46 kilometres south of Tiananmen Square, Daxing (PKX) will act as a second international airport for Beijing and relieve its overloaded sister site. The much smaller Nanyuan Airport – the oldest in China – will be closed once Daxing opens.

Building an airport of this capacity is not straightforward. The designers had to find a way to bring all facilities under one roof whilst laying the foundations for the next phases of the airport expansion.

To prepare for the influx of passengers, the architects had to fundamentally rethink how an airport is designed.

The result is a seven-floor complex with an underground structure linking to a satellite building – which is yet to be built, but will increase the annual capacity to 72m passengers, with further expansion to come.

Unlike the typically linear design of airport terminals, Daxing resembles a starfish. We wanted to design a building that is the most compact with minimal walking distances, says Jean-Charles Content, lead architect at ADP Ingénierie, an engineering subsidiary of the company that operates the Paris airports.

In 2014, the company was awarded a contract to design the terminal building, alongside several partners including late British-Iraqi architect Zaha Hadid, and the Beijing Institute of Architectural Design (BIAD).

The building is designed to allow for sufficient space between each pier to fit all aircraft and organise the flow, Content says.

The layout was inspired by traditional Chinese aesthetics, which often feature spaces centred around courtyards, and has 79 aircraft stands arranged across five piers.

Once passengers reach the commercial area in the centre of the structure, Content explains, they will have to walk no more than 600m – the equivalent of eight minutes – to the furthest gate. The sixth pier is separate, and will host administrative offices and parking.

High-speed, regional, and subway trains will connect the airport to the city of Beijing and other parts of the country. The big difference with this train station is that it’s not a dead end, it’s not located in front of the terminal.

The train station is literally underneath the terminal, says Content. From the platform of the airport express service, lifts will take passengers directly to the departure levels.

But to house a railway station inside an airport complex – with trains that run at 250km per hour – BIAD had to earthquake-proof it, says lead architect Wang Xiaoqun.

Some 1,000 anti-seismic isolation bearings were built into the concrete slabs of the ground level to prevent the terminal building from shaking. As a result, the airport is capable of withstanding an 8.0 magnitude earthquake.

Daxing will be the first airport with two departure levels. Because we designed a terminal for 45 and then 72 million passengers and there is a lot of equipment to fit in for check-in and security, we needed to create a second level for departures.

That is one of the biggest features, says Jean-Yves Coulot, ADP Ingénierie's general manager for China. We wanted to keep it compact and under the same roof.

The top level will have traditional check-in facilities for international and domestic flights, the one below will be dedicated to frequent flyers who are primarily travelling domestically.

The separation is meant to speed up the check-in and security process, Coulot says, particularly for people who checked in on their phones and want to leave their luggage at a self-service bag drop.

From facial recognition at check-in to real-time baggage tracking on mobile phones, travelling through Daxing will be a paperless experience for passengers, according to a spokesperson for SATS, which services aircraft while they are on the ground.

The Singapore-based company will be responsible for the ground handling and inflight catering at the new airport, it already is at Beijing Capital International Airport.

The architects were not only tasked with designing an airport that would make the travel experience as efficient as possible, but also with executing it at speed.

It took less than five years to actually build the airport. We have been extremely impressed by the speed of this project, says Coulot.

At a stone-setting ceremony held on December 26, 2014 the site was still farmland, he recollects, adding that they have been able to build one of the largest airports in the world in such a short time.

The design, however, was a long time in the making. ADP Ingénierie was involved in an initial master plan phase and, from 2011 to 2014, was shortlisted several times and then finally awarded the architecture contract.

Once the concept design was honed, BIAD took over to carry out the development.

It’s a pretty impressive piece of execution, says Richard Gammon, managing director of global aviation at engineering firm Aecom, which was not involved in the project. He compares Daxing airport to Abu Dhabi’s new Midfield Terminal – of similar scale and complexity, that building was commissioned more than ten years ago and, in 2017, had to be delayed to late 2019.

When the airports have strong government backing, and particularly when there is alignment between airlines and airport operators, they tend to move quickly, he says.

But the making of this airport has been a truly international endeavour: Germany’s Thyssenkrupp delivered 155 elevators and 22 escalators whilst Wirtgen machines were used to pave the apron area.

Xsight Systems, an Israeli company, provided an AI-powered detection software that will help keep the runways safe from bird strikes and other potentially damaging objects.

The challenge with any airport project is the long timeline and complexity. The aviation industry is fairly fast-moving, so I would be interested to see what level of adaptation and flexibility was built into that design, says Gammon, adding that industry changes can affect what technology and equipment is used or the way airlines operate, which in turn, dictates the number and types of aircraft stands needed at an airport.

In Europe and the US, for instance, airlines are increasingly moving from larger aircraft to operating smaller, more efficient ones at higher frequency, he says.

My experience of Asia is that typically they would rather go fast and implement changes after the opening. However, if the design is not adapted and updated, airports risk becoming a construction site again shortly after opening.

BIAD may have preempted those risks. The airport will handle 45m passengers a year when it opens, increasing to 72m passengers and two million tonnes of cargo by 2025 once a satellite building has been built.

The whole satellite design and construction will start once the airport is in use, says Xiaoqun.

In the long run, Daxing airport will be able to accommodate 620,000 flights and more than 100 million passengers a year – in the hope of taking away traffic from other Asian hubs such as Dubai and Tokyo – but this will require constructing three additional runways and a whole other terminal building.

ADP Ingénierie’s Content proposes mirroring the design of the first terminal, but only time will tell if that is the right approach.

Since it's the busiest airport in the world and obviously it would be serving its passengers in a very professional manner and many people would be flying from this airport. Great post!
cheap stansted airport parking