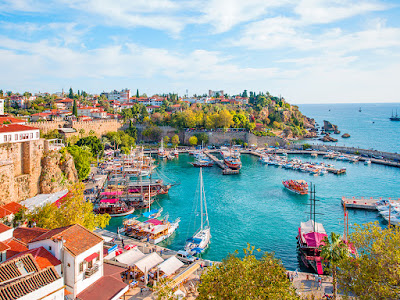 Antalya, one of Turkey’s most popular tourist attractions in the Mediterranean region, has welcomed a total of 6.9 million foreign tourists between January and July 18, marking a strong 16 percent annual increase.

Some 86,000 tourists arrived in the city each day through Antalya and Gazipaşa airports, but on July 14 the city saw a record 96,191 arrivals.

We wake up to a new day with a fresh record. If this trend continues we will easily meet our target of hosting 16 million tourists set for this year, Ülkay Atmaca, the head of the Professional Hotel Managers’ Association (POYD), said.

What matters is not only breaking records but also creating a sustainable tourism industry, Atmaca noted. We need to receive 90,000 tourists every day throughout the year, he added.

The Russian and European markets are performing well so far and there have been increases in the number of tourists visiting the city, according to Atmaca.

He reiterated hoteliers demand that the government extends the upcoming Eid al-Adha holiday to nine days to give boosts to domestic tourism activity.

Foreign tourist arrivals have been in line with expectations so far, said Erkan Yagcı, the president of the Mediterranean Touristic Hoteliers’ Association (AKTOB).

Yagcı stressed that Russian tourist visits have particularly been satisfying.

In remarks he made in June, Yagcı said that at least 250,000 Russian police officers and their families are expected to visit Turkey starting from August after Moscow removed a ban that had prevented members of the Russian security forces from traveling to some countries.

Full of archaeological sites, Antalya is a haven for those who love to delve into history. One of the best-preserved theaters in the world, with a seating capacity of 15,000 spectators, Aspendos is a site to marvel at! During summer, this theater comes to life with Opera performances.

Perge, an important trading port back in 1300 BC, is another great site to see ancient ruins. It was conquered by Alexander the Great and was used as a base for his future conquests. Phaselis, Termessos, Olympos, Myra – these are some of the interesting sites that will take you back in time!

If you are a hiking enthusiast then you must take the Lycian trail – a marked trail around the coast of Lycia in southern Turkey, from Fethiye to Antalya.

Unique and breath-taking, the Lycian Way is a darling of avid hikers and has been rated as one of the most beautiful long distance hikes in the world!

Stretching over 540 kilometers, this trail promises an abundance of wow moments. Passing through several ancients ruins, villages, mountains, and offering some stunning views of the Mediterranean – head for the Lycian Way, your trails will never be the same again!

In the old town of Kaleici, the historic centre of Antalya, it is easy to get lost in the maze, but at the end of the day you will be truly satisfied. Walk in the narrow, cobbled streets, admire the stone and timber houses built during the Ottoman-era; most of them converted into hotels.

As the day draws close, sit by the ancient harbour, while admiring the most enigmatic sunset. The harbour is home to boats and yachts and has plenty of restaurants and bistros offering the best of Mediterranean cuisines.

Enjoying a meal or two by the harbour front or by a beach, or on a mountain – the dining experience in Antalya is quite different.

From a five-star rated restaurant to a traditional, homely food joint, or a quaint cafe near a waterfall, there is no dearth of great places to enjoy a good meal in this city.

Antalya is one of the best places in Turkey to experience luxe living! Stunning beaches dotted with luxury resorts and hotels, life is a retreat here in this picturesque town.

Whether you fancy a sprawling resort near a beach, or a cozy hideout with an old world charm, Antalya has it covered for you!

Night owls can look forward to having a gala time in Antalya! As the sun goes down, this summer town dons a different look.

The town is filled with big, fancy discs, as well as small, cosy pubs and bars – catering to the needs of different types of travellers. Antalya’s nightlife is legendary!

The old town of Kaleici is the best place to shop for local goods and souvenirs from Antalya. Clothes, jewelry, antiques, and carpets – everything is available in the market.

Antalya’s biggest street bazaar, Lara Street market is yet another great place to shop and hone your bargaining skills; it opens every Saturday.

Antalya is among the most popular attractions for tourists and so we can also explore this beautiful destination during our trip.
airport parking deals