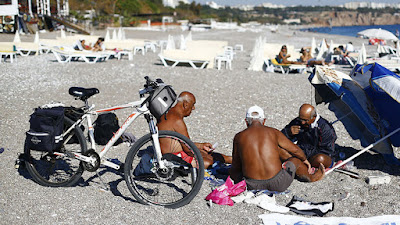 Turkish hoteliers have welcomed the Russian government’s decision that allows Russian police to spend their annual leave in Turkey as they expect this move to boost tourism activity.

Russian police were prohibited to go abroad in 2014, when the Russian Foreign Ministry published a list of 116 countries not recommended for traveling.

However, on June 22, Russian Interior Minister Vladimir Kolokoltsev signed an order, authorizing Russian police to spend their annual leave in Turkey as well as Thailand.

The removal of the ban is a very important development for the Turkish tourism industry, said Osman Ayık, the head of the Turkish Hoteliers’ Federation (TÜROFED).

According to Ayık, there are some 1 million personnel working for the Russian police force.

Together with their families, we are talking about some 2.5 million people. Another 1 million staff are in the Russian army. The Russian government has not yet removed the ban for that personnel, but we expect a similar move soon, Ayık said.

We may see a significant rise in the number of Russian tourist visits to Turkey. The positive impact of the removal of the ban will be felt much stronger in 2020. We are expecting at least 1 million additional visitors from Russia.

The latest data from the Tourism Ministry showed that Russian tourist arrivals increased by 34 percent on an annual basis to 392,000 in April.

In the first four months of the year, a total of 710, 293 Russian nationals spent their holiday in Turkey, a 35.5 percent rise from a year earlier.

In 2018, 5.96 million Russian tourists visited Turkey, up from the previous year’s figure of 4.7 million.