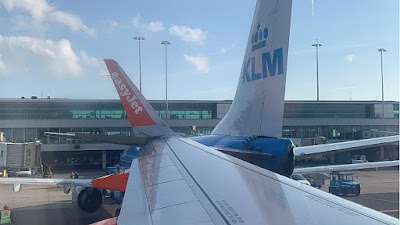 An easyJet flight to London collided with a Dutch KLM aircraft at Amsterdam's Schiphol Airport on Tuesday morning.

Videos and photos captured by passengers aboard both planes appeared to show a clipped wing on at least one of the two passenger jets.

According to passengers, the minor collision happened as the easyJet flight to London Gatwick backed out of its parked position at the Schiphol airport gate.

It came too close to the KLM flight preparing to leave for Madrid, before clipping its wing.

One passenger wrote on Twitter: "My easyJet flight from Amsterdam to London just literally backed up into another plane."

"Our wing is lodged in a KLM tail. We're stuck on the plane while they're investigating."

The same passenger confirmed in a later tweet that they had been rebooked onto a later flight.

Another passenger aboard the easyJet flight tweeted: "Guess I'm stuck here for a while."

In her most recent tweet, however, she said she had not yet been scheduled onto a new flight.

EasyJet said in a statement that the incident happened during "pushback", adding that passengers had been taken back into the terminal and given further information and meal vouchers.

The flight to London Gatwick will now be operated by another aircraft, currently on its way to Amsterdam, it said.

The safety and well-being of our passengers and crew is easyJet's top priority.

An investigation was immediately initiated, according to procedure, to understand what exactly happened.

KLM tweeted a brief statement to confirm the incident, and said: The passengers were not in any danger and were taken off-board.

After a delay of 2.5 hours, the passengers left with another aircraft.

It is being investigated how the situation could have come up.