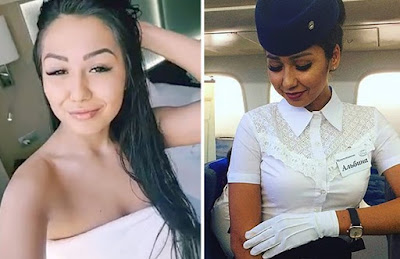 Albina Mukhametzyanova, 23, was understood to have been strangled, according to reports citing law enforcement.

Her corpse was discovered clothed in the bath, which was full with water, at a four-star hotel close to Moscow’s Vnukovo international airport.

She was using the hotel between flights, with staff saying she had shared the suite several times with a man, 25, named by investigators as Nikita E.

He is not known to her friends or family, according to reports.

One theory being explored is that she met him through a dating app, and had gone to the hotel reception to extend the suite for 24 hours before leaving the hotel by taxi and vanishing.

It is understood Albina was strangled

She always wanted to be a flight attendant. It was really her dream.

Her body was then later found by hotel staff.

Albina had worked as a flight attendant for a charter airline called I FLY and had made work trips to China and Vietnam as well as Russian cities.

She was described as “vivacious” and “happy”, training as a paramedic before switching to her career as a flight attendant.

A friend said: She always wanted to be a flight attendant. It was really her dream.

She had worked in this company for three months. She was a very positive person.

When we saw her, she never stopped laughing.

And her sister, Landysh, 26, said: She was so happy and beautiful.

I cannot believe that we will never see her again. She had no boyfriend.

I always asked her about her personal life, but she said that it was too early for her to think about it.

But in social networks, I could see that she had lots of fans. But there was nothing serious. I would know.

My sister was the closest person to me.