CONGO REP: Pointe-Noire Quite Safe Unlike Many African Cities 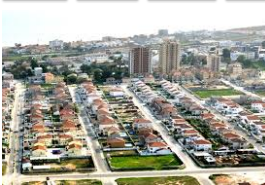 Pointe Noire is a city in Republic of the Congo.

Pointe Noire is the second city of the Republic of the Congo. It is also a major sea port and a tourist destination.

The town has a very French feel to it, because of the colonial past and the still large number of French expatriates and tourists.

Pointe-Noire is the second largest city in the Republic of the Congo, following the capital of Brazzaville, and an autonomous department since 2004.

Before 2004, it was the capital of the Kouilou region now a separate department.

It is situated on a headland between Pointe-Noire Bay and the Atlantic Ocean. Pointe-Noire is the main commercial centre of the country and has a population of 715,334, expanding to well over 1 million when the entire metropolitan area is taken into account.

Pointe-Noire features a tropical savanna climate under the Koppen climate classification. The city features a wet season that spans from October through April, while the remaining 6 months form the dry season. Pointe-Noire receives roughly 1000 mm of precipitation annually.

The name Pointe Noire (Black Point) originated with Portuguese navigators who saw a block of black rocks on the headland in 1484.

From then on, Pointe Noire, called Ponta Negra, became a maritime point of reference, and then a small fishing village starting in 1883, after the French signed a treaty with local people, the Loangos.

It soon became necessary to build a railroad that would connect Brazzaville, the terminus of the river navigation on the Congo River and the Ubangui River, with the Atlantic coast.

As rapids make it impossible to navigate on the Congo River past Brazzaville, and the coastal railroad terminus site had to allow for the construction of a deep-sea port, authorities chose the site of Ponta Negra instead of Libreville as originally envisaged.

Construction of the Congo-Ocean Railway began in 1921, and led to the foundation of Pointe-Noire on 22 May 1922.

In 1927, drinking water became available in the city, which had about 3,000 inhabitants. The airport was built in 1932. In 1934, Governor Raphael Antonetti inaugurated the Congo-Ocean Railway.

The first hospital was built in 1936. That same year, Bank of West Africa (BAO) opened its first branch in the city. In 1942, the Pointe-Noire Harbour welcomed its first ship, and made the city the AEF's seaport.

In 1950, Pointe-Noire had 20,000 inhabitants, and became the capital of the Middle Congo, while Brazzaville was the capital city of the AEF.

In 1957, the Middle-Congo became the Republic of Congo, although it was still not independent.

Incidents which occurred during 1958 legislative elections led the leaders of the Democratic Union for the Defence of African Interests or Union democratique pour la defense des interets africains, UDDIA to transfer the capital to Brazzaville, since Pointe-Noire was under the influence of the political opposition.

Pointe-Noire continued growing, and was the most modern city in 1960, when Congo gained independence. Then, the oil discovery around 1980 re-attracted people and Elf Aquitaine factories. The population doubled by 1982, and reached 360,000 in 1994.

Civil wars in 1997 and 1999 caused an influx of refugees from the surrounding provinces of Lekoumou, Niari, Bouenza, Pool) towards Pointe-Noire, causing the population to climb to over 1 million inhabitants.

Recently the Government has proposed the development of a new bulk resource port to be constructed at Point Indienne, 30 km to the north of the Port of Pointe-Noire.

A meeting was held on 18 December 2012 with a collective of 10 Congo government ministries and invited mining companies to discuss future development opportunities.

Pointe-Noire is the essential centre of the oil industry of the Republic of Congo, one of the main oil producers in Central Africa. Congolese oil has been largely exploited by the French company Elf Aquitaine since its discovery around 1980.

Pointe-Noire is also known for its fishing industry, which is often at odds with the oil development.

Formerly, Pointe-Noire was home to a potash exploitation which led to the construction of a wharf, currently closed to the public.

Pointe-Noire is home to Agostinho Neto Airport which as of May 2015 had direct flights to Abidjan, Addis Ababa, Brazzaville, Casablanca, Cotonou, Douala, Kinshasa–N'Djili, Libreville, Lomé, Malabo, Paris–Charles de Gaulle, Port-Gentil, and Johannesburg–O. R. Tambo and was second busiest airport in the country.

Pointe-Noire is also the terminus of the Congo-Ocean Railway, the railway station being a notable building. As of 2014 the railway was operating the La Gazelle train service every other day to Brazzaville and intermediate destinations.

Thanks to its rapid growth, the city now includes Tie-Tie Railway Station and Ngondji Railway Station, the next railway stations after the Pointe Noire terminus.

Pointe-Noire has a taxi-bus network that runs throughout the entire city.

On 22 June 2010 a train departing from Pointe-Noire derailed resulting in the deaths of at least 50 passengers.

The railway was built by the French between 1921 and 1934 during the French colonial rule in Congo, thousands of people died while building the railway.

The airport is not far from the town or beach hotels. A taxi will cost about CFA2000 to the town.

It is possible from Brazzaville 2-3 times a week. The train is very new as of 2013 and a great ride through the jungle.

Best booked in advance or through a travel agency for Republic of Congo. The train ride is one of Africa's greatest.

Roads inside the town are in good condition.

It is very safe to travel around with a taxi. Taxis in PNR are shared so if you are in a hurry tell him to take you straight where you want to go, and pay around 700-1000 XAF.

Do not go outside of PNR without a known driver and a 4WD.

A 4WD with gas for the day is about $300 and so using your own or booking through a travel agent helps cut costs considerably.

You can drive the road from Brazzaville to Point Noire in a day. The new road is worth driving on just to get a feel for the forest/grassland region of Congo.

It is best to go with a reputable driver from a professional agency.

Taxis are easy to find and are relatively inexpensive. Most journeys around town will cost no more than CFA1000. It is OK to walk around the main parts of town.

Activities to do in Pointe-Noire:

Diosso Gorge. Just outside Pointe Noire, there's the spectactular Diosso gorges. One can negotiate a taxi for the day to go there and forth. Local village boys have barred the route to the lookout point and ask about 2000 XAF pp for entrance.

Mazra Club, Songolo. Seaside in the district of Songolo there is the Mazra Club, a beach club near a stretch of mangrove. The mangrove ecosystem, the seaside location and the different private paillottes make this a comfortable place to hang out.

Local beer or jus costs you 1000 XAF. Be sure to ask the cab driver if he knows the place, because it's rather hard to find.

Conkouati-Douli National Park. A five hour drive (in the dry season) North of Pointe Noire, near the Gabonese border is the vast and relatively scarcely visited national park of Conkouati-Douli. Elephants, gorillas and chimpanzees can be seen here.

Be sure to strenuously ask your guide to do a tour of the Ngongo river as late as possible and to go down the river with the engine turned off to see elephants and gorillas.

Marine Fishing. Catch one of the mean demon-teeth fish or just enjoy a day out on the blue gazing at Congolese coastal life.

Village visits. Tours in Pointe Noire can organize visits to timeless river villages where Congolese life continues as it has for eons under the backdrop of volcanic mountains and the world's second largest rainforest.

Some hotels will accept payment in Euros or US Dollars. There are also a few money exchange offices. Changing Euros or dollars is easy. Very poor rates are given for British pounds. Artisan village is located on the Port Side Beach next to Le Derrik. Prices will differ for every customer.

It is ok to take pictures and send local trustworthy people to buy in your place as they will get at least half of the price. Be careful when buying wood statues as they need to be fumigated for bugs.

Ordering at home will cost you extra 2000XAF for shipment, they work very fast in about 20 minutes you have it at your door.

However, it does get crowded during meal times hence come early. Certainly a recommended place.

Gaspas. Very good fish and chicken on a stick, French type on the sidewalk restaurant, very fresh and tasty food. Do not go to bathroom since it is dirty, chicken is clean.

l'arbalete, Avenue Denis NGOMA, Pointe-Noire, Congo-Brazzaville. Good french restaurant with friendly personal service. Interior is a bit outdated but that gets highly compensated by their food. Closed on Sundays.

Hotels in Pointe Noire are very expensive given the standard of accommodation. Also, not many accept credit cards.

Palm Beach Hotel, On the beach. Reasonably good hotel with pool. Right next to the beach. Rooms in the old block start at CFA80,000. nearly double that in the new block. WiFi is available in some areas - CFA2000 per hour. CFA80000.

Extra charge for side dishes,such as vegetables (string beans), fried plantains or rice. Hotel rooms are comfortable, roughly equivalent to a two or three-star hotel in Europe.

Free WI-FI internet access for hotel guests. Listening to the waves crashing on the beach is a real pleasure. It is also fun to watch the surfers from the beachfront terrace.

Unlike many African cities, it is quite safe to walk in the main parts of the city and the beach area. There are relatively few beggars.

Credit cards are not accepted in many places - only the very best hotels.

Internationally linked ATM's are also not too common. Credit du Congo have a few branches with machines that will accept foreign cards.

There are several FM radio stations all French language, including RFI on 93.2MHz.

Not many people in the town speak English.