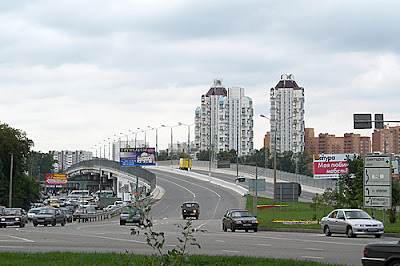 Zelenograd and New Moscow are two large parts of Moscow city, that lie often far outside consolidated residential zone of the city, which lies within and just beyond the MKAD or Moscow Ring Road.

Zelenograd was added in Moscow in 1968 as one of the leading scientific centers. New Moscow was added to Moscow in 2012, forming Novomoskovky and Troitskiy Administrativniy Okrugs with plans of new vast expansion.

Zelenograd or green city is a city which, along with the territories and settlements under its jurisdiction, forms one of the administrative okrugs of Moscow - Zelenogradsky Administrative Okrug.

It is located 37 kilometers (23 mi) from the center of Moscow proper along Leningradskoye Shosse highway. The city color is green and its emblematic animal is the squirrel, more precisely Sciurus vulgaris.

Zelenograd was one of the most powerful centers of electronics, microelectronics and computer industry in the Soviet Union, and it still plays a similar role in modern Russia. It was developed as a reflection of the California Silicon Valley and is known also as Soviet/Russian Silicon Valley.

Zelenograd was founded in 1958 as an unnamed planned city near the village and railway station of Kryukovo on a previously empty, forested place, and its architecture and civic layout yields to one general architectural plan by chief architects Igor Rozhin 1956–1963.

Then Igor Pokrovsky 1963–2002, which has appreciable influence from garden city movement, development of Finish Tapiola district and new towns in the United Kingdom,Harlow and others.

Some researchers of Soviet electronics history mentioned that a similar idea was proposed to the Soviet government by two fugitive Silicon Valley engineers - Alfred Sarant more known in Russia as Philip Staros and Joel Barr or Joseph Berg.

On January 15, 1963 the city received official city status and name Zelenograd, and on November 25, 1968 Zelenograd received the status of district of Moscow one of the 30 districts simultaneously.

In 1988, Zelenograd incorporated the former village of Kryukovo, one of the important sites during the Battle of Moscow October 1941 – January 1942.

Several monuments to the Defenders of Moscow and the heroes of the Great Patriotic War are located in Zelenograd and the surrounding area, the most famous of which is the Shtyki Memorial, from which the remains of the Unknown Soldier were taken for reinterment at the Kremlin Wall in the Alexander Garden in Moscow.

Before 1989, Zelenograd was a de facto closed city in some aspects: it was prohibited to take photos in the central parts of the city, near the plants, teaching and research facilities, and foreigners were not admitted into the city.

In 1991, Zelenograd was reformed in one of the administrative okrugs of Moscow.

The Skhodnya River originates near the village of Alabushevo one of the settlements, which are under Zelenograd jurisdiction and forms three ponds within the precincts of city, Water-tower Pond or School Lake, Small and Large City Pond.

Zelenograd is home to the National Research University of Electronic Technology (MIET).

A local soccer team Zelenograd nicknamed Zelyono-Belye, or Green-Whites was founded in 2002 and in 2007-2010 had been playing in the Russian Second Division.

Vnukovo and Ostafyevo airports are situated in New Moscow proper, though from Ostafyevo airport you still have to go through the old Moscow. It is possible to get from Sheremetyevo to Zelenograd without going to the old city.

You have to change to 400 minibus on Leningrad highway or on local train on Planernaya. From Domodedovo airport you'll have to go through the old city anyway the route through Domodedovo and Podolsk will take more time.

To go to Zosimova Pustyn you may want to go all the way to Bekasovo, but trains there are infrequent. It is possible to get to New Moscow through Podolsk, but you'll have to change to bus there.

Most frequent bus to Zelenograd is bus 400 from Rechnoi Vokzal. It has special pricing. Buses are primary way of public transport to get to New Moscow, new buses are often added.

Zelenograd is accessible by M10 highway. Major highways in New Moscow are M3, A101, Warsaw highway Podolsk - Kresty joining with A101, first Beton Ring A107 and Borovsk highway Peredelkino - Vnukovo - to join with M3. M10 and A101 are often highly congested.

M3 may be less prone to it, except Moscow vicinity, and crossing with A107, A107 is congested near M3 crossing, which is northwest of New Moscow, Warsaw highway is congested in Podolsk, and you'll have to pass congested M2 to get there from MKAD.

A walled stauropegic Russian Orthodox monastery of St. Nicholas the Miracle-Worker located in a suburb of Moscow formerly known as Ugreshi and now called Dzerzhinsky. Existed as early as 1521, when the Tatar horde of Mehmed I Giray reduced Ugreshi to ashes.

The old katholikon of St. Nicholas later destroyed by the Soviets, was built in the 16th century, rebuilt in 2003 . The Ugreshi Monastery was one of the walled abbeys defending approaches to the Russian capital from the south.

A late legend attributes its foundation to Dmitry Donskoy who, on his way to the Kulikovo Field, is supposed to have made a stay there and determined to give a decisive battle to the Tatars after seeing an image of St. Nicholas in a pious dream for this reason founded here the monastery.

Tsar Alexis habited here several times a year. The great katholikon (main church) of the monastery was built to a Russian-Byzantine design by Alexander Kaminsky between 1880 and 1894. It is one of the largest churches in the Moscow region and has a set of new frescoes dating from 2009.

After the Russian Revolution, the monastery were given over to a children labour colony in 1920. The monastery fully restored and operates several museums, including one dedicated to Nicholas II of Russia. There is a new seminary on the grounds.

Activities you can perform on Zelenograd

It is the biennial auto show held at Crocus Expo in Moscow suburb. The show is scheduled by the Organisation Internationale des Constructeurs d'Automobiles, which considers it a major international auto show. The organizers are the Association of Russian Carmakers NP and the Expo Centre.

It offers cozy rooms, all of which have air-conditioner, cable TV, mini-bar, and refrigerator. Some of its amenities are restaurant and bar, fitness room/gym, and high-speed Internet access. Sgl RUB3500-4500; dbl. RUB4800-10000.

A continental breakfast is available on request in the Vintage’s breakfast room. Room service is available and packed lunches can be organised for day trips.Safe deposit box and free newspapers. RUB 2700-3600.