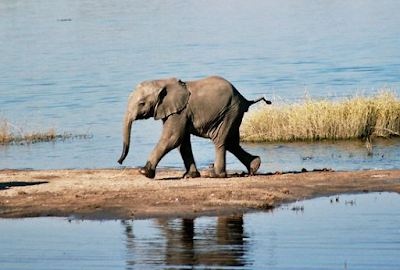 The Chobe National Park is located in the north-west of Botswana, near the borders to Zambia, Zimbabwe and Namibia and is famous for its vast variety of wildlife.

Chobe National Park was founded in 1967 which made it Botswana's first national park.

Located in the northern Botswana, the Chobe National Park attracts thousands of visitors every year due to its fame as one of the largest game concentrations in the country.

This wildlife sanctuary also boasts the largest elephant population in Africa both in number and size.

Located in the north of the country, it is Botswana's third largest park, after the Central Kalahari Game Reserve and the Gemsbok National Park, and has one of the greatest concentrations of game in all of Africa.

The original inhabitants of this area were the San bushmen also known as the Basarwa people in Botswana.

They were nomadic hunter-gatherers who were constantly moving from place to place to find food sources, namely fruits, water and wild animals.

You can find San paintings inside rocky hills of the park.

At the beginning of the 20th century, the region that would become Botswana was divided into different land tenure systems. At that time, a major part of the park's area was classified as crown land.

The idea of a national park to protect the varied wildlife found here as well as promote tourism first appeared in 1931.

In 1943, heavy tsetse infestations occurred throughout the region, delaying the creation of the national park. By 1953, the project received governmental attention again: 21,000 km2 were suggested to become a game reserve.

The Chobe Game Reserve was officially created in 1960, though smaller than initially desired. In 1967, the reserve was declared a national park.

At that time there were several industrial settlements in the region, especially at Serondela, where the timber industry proliferated.

These settlements were gradually moved out of the park, and it was not until 1975 that the whole protected area was exempt from human activity.

Nowadays traces of the prior timber industry are still visible at Serondela.

Chobe National Park can be divided up to 4 areas, with its ecosystem:

Linyanti Marsh, located at the Northwest corner of the park and to the North of Savuti, is adjacent to Linyanti River. To the west of this area lies Selinda Reserve and on the northern bank of Kwando River is Namibia's Nkasa Rupara National Park.

Around these 2 rivers are riverine woodlands, open woodlands as well as lagoons, and the rest of the region mainly consists of flood plains.

The rarer red lechwe, sitatunga and a bask of crocodiles also occur in the area. Bird life is very rich here.

Between Linyanti and Savuti Marshes lies a hot and dry hinterland, mainly occupied by the Nogatsaa grass woodland. This section is little known and is a great place for spotting elands.

Serondela area or Chobe riverfront, situated in the extreme Northeast of the park, has as its main geographical features lush floodplains and dense woodland of mahogany, teak and other hardwoods now largely reduced by heavy elephant pressure.

The Chobe River, which flows along the Northeast border of the park, is a major watering spot, especially in the dry season,May through October for large breeding herds of elephants, as well as families of giraffe, sable and cape buffalo.

The flood plains are the only place in Botswana where the puku antelope can be seen.

When in flood spoonbills, ibis, various species of stork, duck and other waterfowl flock to the area. This is likely Chobe's most visited section, in large part because of its proximity to the Victoria Falls.

The town of Kasane, situated just downstream, is the most important town of the region and serves as the northern entrance to the park.

Savuti Marsh area,10,878 km2 large, constitutes the western stretch of the park 50 km north of Mababe Gate. The Savuti Marsh is the relic of a large inland lake whose water supply was cut a long time ago by tectonic movements.

Nowadays the marsh is fed by the erratic Savuti Channel, which dries up for long periods then curiously flows again, a consequence of tectonic activity in the area. It is currently flowing again and in January 2010 reached Savuti Marsh for the first time since 1982.

As a result of this variable flow, there are hundred of dead trees along the channel's bank.

The region is also covered with extensive savannahs and rolling grasslands, which makes wildlife particularly dynamic in this section of the park.

During the dry seasons, tourists going on safari often view the rhinoceros, warthog, kudu, impala, zebra, wildebeest and a herd of elephants bullying each other.

At rain seasons, the rich birdlife of the park with 450 species in the whole park is well represented. Packs of lions, hyenas, zebras or more rarely cheetahs are visible as well. This region is indeed reputed for its annual migration of zebras and predators.

Chobe has one of the greatest concentration of elephants of any national park in Africa. They are most visible during the dry season when they congregate around the water sources, especially the Chobe river.

You can see 4 of the Big 5 in Chobe: elephant, lion, leopard and buffalo - but not or very rarely rhino. Chobe has a multitude of antelope including the rare sable.

The elephant population seems to have solidly built up since 1990, from a few thousand.

Elephants living here are Kalahari elephants, the largest in size of all known elephant populations. They are characterized by rather brittle ivory and short tusks, perhaps due to calcium deficiency in the soils.

Damage caused by the high numbers of elephants is rife in some areas. In fact, concentration is so high throughout Chobe that culls have been considered, but are too controversial and have thus far been rejected.

At dry season, these elephants sojourn in Chobe River and the Linyanti River areas.

During rain season, they make a 200-km migration to the southeast stretch of the park. Their distribution zone however outreaches the park and spreads to northwestern Zimbabwe.

The park has a distinct wet and dry season, the wet being from December until May.

As with much of Africa the animals may migrate further from the permanent water sources during the wet, and therefore are easier to view during the dry.

There are a multitude of tours operating from Kasane and from both sides of the falls at Victoria Falls and Livingstone.

Tours operating from Victoria Falls will transfer you to the common river border between Zambia, Zimbabwe and Botswana. A short boat crossing puts you in Botswana, only five minutes drive from Kasana and the Safari lodges.

Park entrance fees apply. Often these are included with the tour price, if you are on a guided tour.

The boat trip will allow you to see some crocodiles, and elephants and close quarters. The boat operators tend to keep their distance a little more from the hippos.

You can expect to see a far greater variety of wildlife on land.

The roads are poorly developed, and a 4-wheel-drive properly equipped vehicle is essential if you want to drive yourself. There is a one-way system for getting around the park near Kasane. Read the signs at the entrance.

There is an abundance of safari-vehicles that will drive you around from Kasane or the safari lodges.

Chobe is home to vast herds of Elephants. These are the Kalahari elephants and are the biggest in Africa but often have broken tusks, this is due to the lack of calcium in their diet which renders them brittle.

All the other large animals are present except Rhino which have been driven to local extinction due to poaching.

Chobe Chilwero Lodge borders the Chobe National Park and is situated above Chobe River, offering some good views. It is luxury accommodation and therefore not really cheap, but this is the case with most establishments in Botswana.

Chobe Game Lodge is overlooking the Chobe River and the Caprivi floodplains, it is the only permanent safari lodge within the Chobe National Park.

There are some designated camping areas in the park, though you are strongly recommended to camp only with a guide.

Even then take some vigilance to assure safety.

The animals in the park should be respected at all times.

Never try to interact with the wildlife.

Drive to the Victoria Falls at the border between Zimbabwe and Zambia. Distance is about 60km.

Go south into the Okavango Delta.