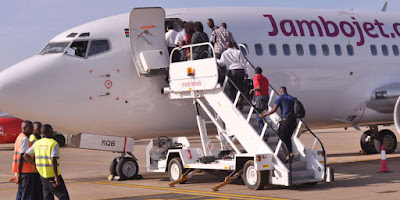 Budget airline Jambojet has introduced additional flights to the coastal cities as it seeks to cash in on the high demand from holidaymakers.

The airline’s CEO Willem Hondius said there has been increased demand for air travel between Nairobi and the Coast forcing the company to increase frequency starting Tuesday (Dec 19).

Jambojet is now operating three flights to Malindi and Ukunda and four to Mombasa per week.

Yes we have added flights to Malindi (3 per week), Mombasa (4 per week), Ukunda (3 per week plus a third frequency per day between December 19 and 31),said Mr Hondius.

Mr Hondius said all routes that the airline plies have registered high demand. During the festive season we see demand going up sharply and there is always need to add flights,he said.

Last week the airline received one of two planes it purchased last month at Sh6.6 billion to cater for increased demand this Christmas season.

The addition brings Jambojet’s fleet to six – two Q400 planes that it acquired earlier in the year and two Boeing 737s leased from Kenya Airways KQ its parent company.

The airline said the remaining plane will arrive later this month. The two planes have been acquired from Danish firm Nordic Aviation Capital.

The cost of booking air tickets has significantly gone up as more passengers seek to travel by air. Those who have been booking from last week are paying almost double the price compared with travellers who booked in November.

It’s still quite last minute unfortunately. However for the festive season people tend to book a bit earlier, said the CEO.

Meanwhile, Jambojet is set to start flights to Tanzania and Uganda by February next year, kicking off its regional expansion plan designed to see the low-cost carrier fly to 16 new routes.

The Transport ministry said it had applied for permission for the budget airline, a subsidiary of Kenya Airways is to fly to the countries.

The government has applied for designations on our behalf to allow us operate on six regional routes, Willem Hondius, Jambojet’s chief executive said.

For now, the application covers Uganda, Tanzania, Rwanda, Burundi, Ethiopia and Democratic Republic of Congo. However, we intend to begin by flying to Tanzania and Uganda.

Jambojet also plans to start flying to Wajir by next February, adding to its existing flights between Nairobi and Mombasa, Eldoret, Kisumu, Lamu, Malindi and Ukunda (Diani).

The airline had earlier said it would make its international debut by the end of this year, but delays in receiving two Bombardier Q400 aircraft has seen them push their launch date forward.

These two planes are now expected before Christmas.

The extended electioneering period took a toll on the business, with total bookings for the four months to October dipping by around 16 per cent, Mr Hondius revealed.

In the weeks around the two general elections, he added, passenger numbers dropped by a quarter, highlighting the huge toll that the process had on Kenya’s aviation sector.

The loss was attributable to last year’s peak season when insufficient aircraft messed us up. The elections affected us negatively this year. While business has rebounded, we shall assess the full impact with time, said Mr Hondius.

Jambojet is set to receive two new aircraft worth Sh6.6 billion before Christmas in anticipation of the high-season passenger demand and as the low-cost carrier prepares to start international flights.

The airline, a subsidiary of national carrier Kenya Airways is set to receive the first of two Bombardier Q400 on December 11. The second one is expected to touch down in Nairobi six days later.

We are confident that the Q400 aircraft will allow us to implement our growth strategy as we strive to launch new routes and to respond to the anticipated increase in demand, Willem Hondius, Jambojet’s chief executive, said in a statement.

The budget carrier will lease the aircraft from Danish firm Nordic Aviation Capital which in turn signed a purchase order for the planes with Montreal-based Bombardier on Wednesday.

Jambojet, which has been operational since April 2014, currently operates four aircraft — two Q400 planes which were also acquired this year and two Boeing 737s leased from its parent firm.

The airline plies six routes in Kenya; between Nairobi and Mombasa, Eldoret, Kisumu, Malindi and Ukunda (Diani). We are looking at retiring our narrow body fleet (Boeing 737s) and transitioning to an all-Q400 fleet by end of this year, said Mr Hondius.

The carrier has already returned one of the Boeings to KQ with the national carrier now expected to put it up for sale.

Thousands of Jambojet passengers travelling to the Coast over Christmas were hit by flight delays and cancellations.

The airline said the delays resulted from technical problems on one Bombardier, which was compounded by the delayed arrival of the aircraft to handle higher passenger numbers during the holiday season.

Jambojet, which issued an apology for these delays, has since then set out to increase its fleet to avoid a repeat of this incident even as looks to expand regionally.

Jambojet has slashed baggage fees by up to 65 per cent in a bid to generate more non-passenger ticket revenue for the budget airline.

The low-cost carrier has announced that its highest luggage fee, charged on 32 kilogrammes of baggage, will drop to Sh5,500 for payments made at their airport and half that for bookings made through agents or online.

This marks a sharp fall from the Sh15,600 and Sh7,800 respectively which Jambojet, a Kenya Airways subsidiary, was charging its customers.

The extras normally add on to and sometimes exceed the budget ticket costs.

Payments made at the airport will cost double across all bands.

Jambojet achieved a 90 per cent on-time-performance (OTP) in September and October mainly driven by a new fleet, records show.

The low-cost carrier recorded a six per cent higher average of OTP in the two months after recording 84 per cent in August.

OTP is an industry benchmark calculated based on flights taking off and landing within 15 minutes of the scheduled time.

We are well over our target of 80 per cent which is considerably better than the industry average. Without a doubt, this is a very good sign as we go into the peak festive season, said Jambojet chief executive Willem Hondius.

Our investment in the two new Bombardier Dash 8 Q400 aircrafts has enabled us to deliver a very reliable flight schedule across the country and live up to the expectation of customers.

The airline has maintained an average OTP of 85 per cent in the past seven months, Mr Hondius said.

Jambojet has in its nearly four years of operation in Kenya increased its routes from four to six, with increased frequency of flights due to fleet expansion.

It currently operates 75 flights per week on its domestic routes from Nairobi to Mombasa, Eldoret, Kisumu, Malindi and Ukunda.

The airline, which has a code-share agreement with Kenya Airways for domestic travel, expects delivery of two new aircraft later this year.