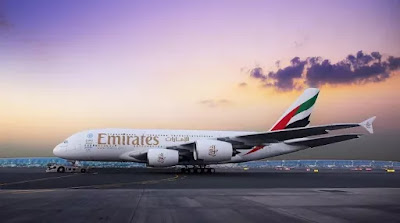 A passenger on an Emirates flight from Dubai to Lagos in Nigeria has died, the airline has confirmed.

A spokesperson for the Dubai-based carrier said cabin crew found the passenger unconscious in her seat on board flight EK783 on December 15, as the flight was preparing for descent.

Crew consulted doctors on board the flight and on the ground via Emirates’ Medlink system, but the passenger was unresponsive, a statement said.

It added that upon arrival in Lagos, the medical authorities on ground declared that the passenger had sadly passed away.

Emirates expresses condolences to the family, the spokesperson said.

Meanwhile, an Emirates Airbus A380, performing flight from Dubai to Sao Paulo, was in the initial climb out of Dubai when the crew stopped the climb at 6000 feet, shut the #1 engine down, dumped fuel and returned to Dubai for a safe landing about 110 minutes after departure.

A replacement Airbus A380-800 registration A6-EUT reached Sao Paulo with a delay of about 6 hours.

The occurrence aircraft is still on the ground about 64 hours after landing back.

Tunisian authorities say their decision to suspend all Emirates airline flights into the country cannot be described as a diplomatic crisis between the North African country and the United Arab Emirates.

A tit-for-tat dispute began on Friday when Emirates prohibited female Tunisian passengers from being able to board flights to the UAE without giving a reason.

Speaking Tuesday, Tunisian presidential spokeswoman Saida Garrach said the UAE had voiced fear that an attack will probably be committed by Tunisian women or women with Tunisian passports.

The travel ban triggered confusion and anger at the Tunis airport and on media.

In response, the Tunisian transport ministry on Monday suspended all Emirates flights into Tunis. Emirates employees were first informed of the news the night before in an internal company email that said Any passengers holding TUN as final destination are not to be accepted for travel at point of origin.

Emirates announced on Twitter that the Dubai-Tunis service had been stopped based on instructions by the Tunisian authorities.

The Tunisian transport ministry has said the suspension would remain in effect until the airline finds a suitable solution to operate its flights in accordance with laws and international agreements.

Tunisian state media reported that a task force had been set up in Tunisia's consulate in Dubai and the UAE's Northern Emirates to monitor the situation of Tunisian expatriates seeking to depart from Dubai airport.

UAE Minister of State for Foreign Affairs Anwar Gargash, had first suggested on Sunday that the airline's initial decision to temporarily ban female passengers from boarding Emirates flights was a security measure.

He wrote on Twitter that security information had led to limited and circumstantial measures that were communicated to the Tunisian government.

We respect Tunisian women, value their pioneering experience and consider them a safety valve, Gargash wrote. Together, let's avoid attempts of misinterpretation.

Social media users have blasted the UAE as sexist and racist after the Gulf state banned Tunisian women from entry.

Tunisia responded to the airline's move on Sunday, suspending all Emirates flights to and from the North African country.

The transport ministry said in a statement on its Facebook page the suspension would remain until Emirates can find a suitable solution to operate its flights in accordance with international laws and treaties.

The ministry previously described the move as illegal.

The UAE has cited security as the reason for the travel restriction, and Emirates said it will stop flying to Tunisia as instructed from Monday.

But critics have said the move was discriminatory and lashed out at the UAE.

A discussion is taking place under two hashtags on social media: #Nowomennofly and #تونس_تؤدب_الامارات, which means #TunisiadisciplinestheUAE.

@khulafiii said it was "amazing" that Tunisia had responded strongly.

The fact that Tunisia banned emirates airlines just because of tunisian women are amazing.

@ryma12 took the opportunity to give a brief history lesson, noting achievements in Tunisia to mock the UAE. She said women were given the vote in 1957, years before the UAE was founded.

"Never underestimate a nation that started a revolution ... that spread across the Middle East," said Shaima Dallali, a law student.

Never underestimate a nation that started a revolution... that spread across the Middle East .#تونس_تودب_الامارات

Sarah Elamin praised the men who defended Tunisian women against "discrimination by Emirates".

Me watching Tunisian men on the hashtag defending Tunisian women against discrimination by Emirates Airlines.

"I don't mean to applaud basic decency but it's just so refreshing to see Arab men not being absolute trash for once," Elamin wrote in a follow-up tweet.

Flah Marwa also said the issue centred on the discrimination of women.

Haithem Afli called the move by Emirates an "act of sexism and stupidity".

Haithem Afli
@AfliHaithem
In an act of sexism and stupidity, the Emirates bans all Tunisian WOMEN regardless of age from using UAE airports even in a transit with no given reasons whatsoever. It's not only an insult to Tunisian women, it is an insult to ALL women worldwide.#PetroDolar #NowomanNofly

Yosr Jouini, an aspiring data scientist, joined those calling for a boycott of the airline.

Olfa Said noted that the American actor Jennifer Aniston appears in Emirates advertising, and questioned the celebrity's opinion on the issue.

olfa said
@olfasaid1
A message for Jennifer Aniston. As women, I wonder what's your opinion of banning Tunisian women's from traveling in fly emirates especially because you are their media face? #تونس_تودب_الامارات #jenniferaniston