UGANDA: Etihad To Stop Flights To Entebbe International Airport For Luck Of Business 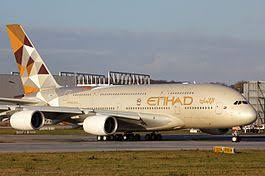 According to a statement issued by Etihad yesterday, flights between Abu Dhabi in the United Arab Emirates and Entebbe will be suspended from 25 March 2018 following a commercial assessment of the route's performance.

The airline assured ticket holders that they will be provided with alternative travel options to their final destination.

Etihad introduced service to Entebbe in May 2015.

At the time, James Hogan, president of Etihad Airways, said: Uganda is one of the continent’s fastest-growing business and tourism destinations and the launch of services to Uganda is consistent with our strategy of targeting areas of strong growth in emerging markets.

Etihad follows British Airways as a major airline to suspend service to Uganda in the last three years.

British Airways suspended its service to Entebbe in October 2015 after 24 years.

Other multinationals that have quit the struggling Ugandan economy in that period include supermarket chains Uchumi and Nakumatt and insurance giant AIG.

According to Bank of Uganda, the Ugandan economy slowed down to 3.9 percent annual growth in 2016-17.