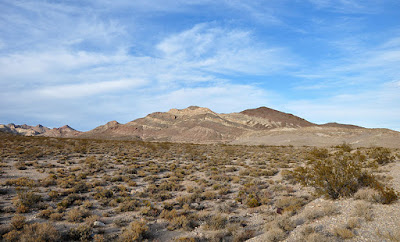 The Amargosa Desert is located in Nye County in western Nevada, United States, along the California–Nevada border, comprising the northeastern portion of the geographic Amargosa Valley, north of the Ash Meadows National Wildlife Refuge

The desert is named after the Amargosa River, so-named for the Spanish word for bitter because of the bitter taste of the water.

The Amargosa Desert lies at an elevation of about 2,600 to 2,750 feet (790 to 840 m), and includes Crater Flat and the community of Amargosa Valley, Nevada, formerly Lathrop Wells, which lies at the southern end of the desert.

The desert lies between the Funeral Mountains and Death Valley to the west, and Yucca Mountain and the Nellis Air Force Range to the east.

The Amargosa Desert is an arid desert habitat and an ecotone between the northern Great Basin and southern Mojave Desert ecosystems and biogeography regions.

The seasonal Amargosa River course runs through the desert, with the rare Shoshone pupfish in nearby Amargosa Pupfish Station of the Desert National Wildlife Refuge Complex.

It is not known when the first humans settled in the Amargosa Desert. Ancient campsites have been found that date back at least 10,000 years, to the end of the last ice age.

Examination of archaeological remains in the valley implies more extensive use by aboriginal peoples than had been previously estimated.

Pottery and other artifacts have been found that date back from approximately 1000 A.D. to even earlier times.

During the nineteenth century, two groups of Native Americans occupied the Amargosa Valley: the Southern Paiute and the Western Shoshone.

Both were extremely adept at extracting a living from their marginal environment, subsisting on wild plant foods and supplemented by wild game.

The first community in the Amargosa Desert was founded circa 1905 as the result of extensive borax mining in the area.

In 1907, two railroads started to service the borax, gold, silver, lead and other important mineral mining and processing operations in the surrounding region.

Modern development did not begin in the valley until the early 1950s. Electric power, other than that produced by private generators, was not available until 1963. Until the early 1990s growth in Amargosa Valley was minimal.

More recently, intense growth in Las Vegas has led many new residents to settle in Amargosa Valley and nearby Pahrump.

Amargosa Valley is served by the 775 area code, and most landline phone numbers in the area utilize the 372 exchange, following the format (775) 372-xxxx.

Amargosa Valley is near the controversial Yucca Mountain Repository, a U.S. Department of Energy (DOE) facility on federal land, designed for the storage of high-level nuclear waste.

President George W. Bush signed House Joint Resolution 87 on July 23, 2002, authorizing the DOE to proceed with construction at Yucca Mountain, although the facility was not expected to accept its first shipments of radioactive materials before 2012.

The facility's main entrance will be in Amargosa Valley, approximately 14 miles (23 km) south of the storage tunnels.

In 2009 President Barack Obama stated that the repository was no longer being considered as a site for the long-term storage of nuclear waste.

Originally designed as a concentrating solar power (CSP) project, the project was converted to photovoltaic (PV) technology. Solar Millennium went bankrupt and the project stalled. A smaller 65MW PV plant on private land was proposed by First Solar in 2013.

The refuge provides habitat for at least 24 plants and animals found nowhere else in the world.

Ash Meadows NWR can be accessed via SR 373 in Amargosa Valley, SR 160 near Crystal, Nevada or from Bell Vista Road west of Pahrump. Entrances to the refuge are marked with road signs.

The dune formation and surrounding land is administered by the BLM and is open to motorized and non-motorized recreational uses.