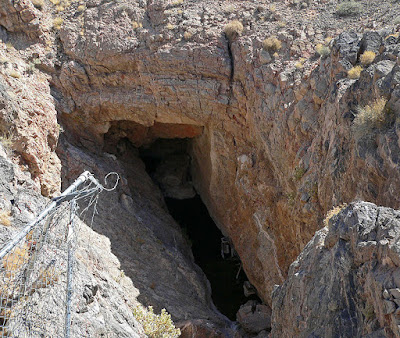 Devils Hole is a geologic formation located within the Ash Meadows National Wildlife Refuge, in Nye County, Nevada in the Southwestern United States.

Devils Hole, a detached unit of Death Valley National Park is habitat for the only naturally occurring population of the endangered Devils Hole pupfish (Cyprinodon diabolis).

The 40 acres (16 ha) unit is part of the Ash Meadows complex, an area of desert uplands and spring-fed oases that was designated as a National Wildlife Refuge in 1984.

According to geologists, the caves were formed over 500,000 years ago.

The pool has frequently experienced activity due to far away earthquakes in Japan, Indonesia and Chile, which have been likened to extremely small scale tsunamis.

Devils Hole is the only natural habitat of the Devils Hole pupfish, which thrives despite the hot, oxygen-poor water.

It is an IUCN Red List endangered species. The pupfish has been described as the world's rarest fish, with a population of less than 200 since 2005.

Genetic information indicates that the pupfish species is as old as the Hole itself, which opened to the surface about 60,000 years ago.

The pupfish have been protected since being declared an endangered species in 1967.

Conflicts of the ownership and use of the groundwater around Devils Hole caused litigation in the 1980s.

The litigation triggered further protections of the pupfish. However, since the late 1990s, the pupfish population has substantially decreased.

The reasons for the decrease are unknown. Attempts to establish refuge populations of the pupfish through 2013 have failed.