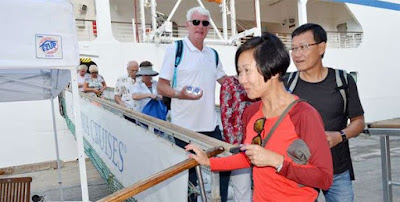 International tourist arrivals around the world has hit 1.1 billion mark in 10 months to October this year, according to the UNWTO World Tourism Barometer.

The figure is a seven per cent increase compared to similar period last year.

International tourist arrivals to Kenya rose 10 per cent to 723,000 visitors between January and September.

The surge in visitor numbers was also as a result of increased visits to Maasai Mara Game Reserve for the annual spectacle of wildebeest migration.

The strong tourism demand of the earlier months of 2017, including Northern Hemisphere summer peak season, was maintained through October.

Destinations worldwide received a total of 1,127 million international tourist arrivals (overnight visitors) in the first 10 months of the year, 70 million more than in the same period of 2016.

Results were driven by sustained growth in many destinations and a firm recovery in places that experienced a decline last year.

Growth in international arrivals exceeded seven per cent in all destinations of Southern and Mediterranean Europe, with a rapid recovery seen in Turkey, and double-digit increases for most of the region’s other destinations.

In North Africa and the Middle East, Egypt, Tunisia and Palestine rebounded strongly from previous years’ declines, while Morocco, Bahrain, Jordan, Lebanon, and the United Arab Emirates all continued to report sustained growth.

These robust results, the best we have seen in many years, reflect the sustained demand for travel around the world, in line with the improved global economy and the rebound of destinations that suffered declines in previous years, said UNWTO secretary-general Taleb Rifai at the second UNWTO/Unesco meet in Oman.

North American destinations experts Goway Travel have declared Kenya s one of the top and upcoming must-visit locations in the world this year.

Releasing its list of most-sought after destinations by avid globetrotters, Goway Travel said they publicised the list after receiving favourable feedback from individuals, families and groups who agreed with the selection that Kenya was among top seven most favoured location on Goway Travel’s exotic destinations selections.

Repeat visitors described Kenyans as charming and the country as a home to the greatest wildlife spectacle on earth — the wildebeest migration, dubbed as the Eighth Wonder of the world that attracts global television viewership annually.

Kenya is a perennial favourite and very ideal for a first-time safari, but also sees its share of repeat visitors, as there is so much to see. Right now, there are many never to be repeated offers on Kenya, including Goway’s Jambo Kenya Safari Sale, it said.

The advance bookings have been confirmed despite the jitters related to the next General Election set for August.

Goway Travel’s disclosure of its early bookings’ register come amid the planned February 23-26 global meet for American Society of Travel Agents — ASTA Destination Expo 2017 — to be held in Nairobi where 2,000 travel agents from America and another 1,000 ASTA agents from other parts of the world are expected to attend.

Goway Travel has been in business since 1970 providing select on select travel destinations in Africa, Asia, Australia, New Zealand, Central and South America and Europe.

Its services targeting individuals, families and groups are offered from its Toronto, Vancouver, Los Angeles and Sydney offices as well as online portal.

Other locations in the selection of top destinations include Iceland’s city of Reykjavik, Sydney in Australia, Colombia in South America, Italy’s ancient city of Tuscany, The Islands of Tahiti — French Polynesia — as well as Conrad Bora Bora Nui region in French Polynesia.

Hack Ethics is a Verified Experienced Binary Options Recovery Specialist and Professional Hacker that provides the experience, intelligence, expertise in Asset Recovery and successfully solve ANY DESIRED HACKING SERVICES YOU WANT with ease.

People have lost their hard earned money through this BINARY OPTIONS TRADINGS, yet they would go to meet FAKE HACKERS who are also scammers unknowingly to help them recover their money and they would end up losing more money in the process. These Scammers also tend to put Fake Testimonies out there just to steal more from you by giving you False hope. I understand how heartbreaking it is to be a BINARY OPTIONS SCAM VICTIM after you've been promised your fortune by Binary Companies and then they ignore your Emails or Calls after stealing from you.  I'm taking every step to render solution to those innocent people affected and help them get every penny they lost.  CONTACT  EMAIL  -  HACKETHICS008@GMAIL.COM
REPOSTING MY ARTICLE ON EVERY PLATFORM AND FORUM TO HELP VICTIMS OUT THERE.