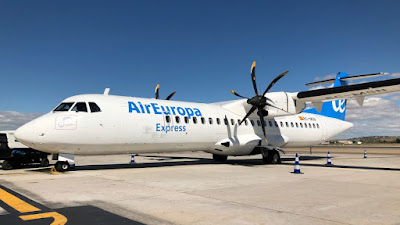 Spanish airline will start its flights from Madrid to Puerto Iguazu with weekly frequency operated with the Boeing 787-8, ticket sales started already.

Flight Number UX-45 will depart from Madrid on Saturdays at 23:55 Local Time to arrive in Puerto Iguazu on following day at 07:05 Local Time with a duration of 12:10 minutes and the return of UX-46, will be at 08:35 Local Time, landing at the Spanish capital at 05:10 the next day after a stop in Montevideo.

In addition, the increase of an additional frequency is foreseen with a scale in the opposite direction in the Uruguayan capital, although the date has not been mentioned.

With 2 intense years of negotiations, the Province of Misiones will be able to be connected to Europe through the Hub of the airline in Madrid-Barajas and will further enhance the tourist attractions of the area such as the Iguazu Falls as well as benefit Ciudad del Este with its various shopping centers.

With the addition of Puerto Iguazu, Argentina will become the market with the largest presence in South America, currently flying from Buenos Aires with a daily frequency and Cordoba with a stopover in Asuncion with five weekly frequencies.

The three Skyteam members' current partnership dates back over 15 years and involves codesharing on each other's European services out of Paris CDG, Amsterdam Schiphol, and Madrid Barajas.

A statement issued on Wednesday, August 1, said the parties were currently conducting an integral analysis of the joint venture given the complementarity of their respective networks from/to Central and South America.

Preliminary results show it would provide significant additional benefits to customers in the form of improved connectivity, increased seat availability and a basis to launch new routes and direct flights between the two continents.

The Franco-Dutch carrier group also has strategic partnerships with Virgin Atlantic for transatlantic flights although discussions over strategic cooperation on travel to other parts of the world are underway, Gol Linhas Aéreas Inteligentes in Brazil, China Eastern Airlines, Xiamen Airlines, and China Southern Airlines...

The company is offering a one-way flight from Tel Aviv to Paphos in Cyprus in late October for €20 and a return flight for €32, a €10 discount in each direction.

Flights to Burgas in Bulgaria, for example, are being offered for €34 one-way and €42 for a return flight.

These prices include the flight only, without luggage, with a suitcase costing at least €30 in each direction. The bargain campaign is valid until September 3 at midnight.

A partnership between Ryanair and Air Europa is offering Israelis flights to Miami, Venezuela, Colombia, Peru, and Paraguay with a stopover in Madrid.

For example, a roundtrip ticket to Miami in late October costs €580. Since these flights involve cooperation with a regular airline, in contrast to Ryanair's own flights, the price includes a suitcase weighing up to 23 kilograms and hand luggage weighing up to 10 kilograms.

Following disruptions and cancellations of hundreds of its flights, Ryanair announced that it was recognizing FORSA, the union that its pilots joined.

Tens of thousands of the airline's passengers were affected by these disruptions at the height of the vacation season in Europe.

Ryanair announced that 65% of its cabin crew were unionized under agreements recognized by the company. Ryanair's management will now work with representatives of Irish union FORSA.