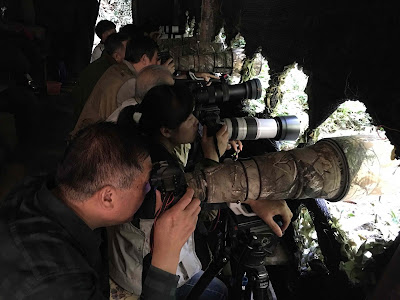 Located in southwest China's Yunnan Province, the Gaoligong National Nature Reserve in Baoshan County is home to hundreds of species of birds, both local and migratory. Over the last few years, the reserve has attracted another type of traveler: birdwatchers.

Hou Tiguo lives in the village of Baihualing, or the “hundred flower mountain.” Despite his rudimentary education, Hou has made a reputation as a skilled bird guide with rich knowledge of local fauna.

As more birdwatchers, or better known as “birders”, flocked to the village, more fellow villagers also started to follow in Hou’s footsteps. Together, they provide one-stop services, providing everything from airport pick-up to food, accommodation and, above all, birding services.

Some other regions with rich bird resources are also following suit. In Yingjiang, another county in Yunnan, the local government has led the effort to incubate its own bird-watching industry: training local guides, constructing bird watching spots, while building inns and homestays.

The local government is hoping the growing niche market will also help foster other local farm produce, such as walnuts and coffee, as well as other less tangible resources, including the region’s colorful clothes and vibrant culture.

At the same time, the birding industry is also exploring cooperation with education institutions to launch nature education for students.

A more ambitious plan is also in the making to build a so-called Birding Belt in West Yunnan, with an aim to create an integrated economic eco-system in the region.

Apart from helping lift the local residents out of poverty, the fledgling birding industry also provides a luminary example of how community nature conservation plays a role in turning villagers, including former poachers, into bird protectors.

Feeding birds in the forests near his home is how 32-year-old Cai Wu starts his day. A member of the Lisu ethnic minority group from a small village in Yingjiang County in southwest China has made this one of his most important daily routines for the last three years.

I come to feed the birds around 7 o’clock every morning. Usually, the large birds like eating corn while the smaller ones prefer mealworms.

The area borders Myanmar, and is home to many of China’s minorities such as the Dai, Jingpo, Lisu and Achang.

It is also known as a habitat to more than 600 species of birds due to the biodiversity of the climate, including hornbills not found anywhere else in the country.

In recent years, more and more bird lovers from home and abroad are flocking here with their cameras.

This place is very good. There’re many hills here and the vegetation is beautiful. This morning, we saw many different birds. It’s great for us, says a birdwatcher from France.

With the growing number of avid birdwatchers coming to the area, the locals are looking at ways to cash in.

With support from the local government, Cai Wu and his fellow villagers began to build bird-watching sheds in the forests in 2015. They charge each visitor 60 yuan about nine US dollars.

They also provide transportation and carry photography equipment for visitors.

Months ago, Cai and several other villagers just opened a hostel and a restaurant near the forest. He said what they can get from the bird-watching services is a lot more than traditional farming.

More importantly, benefiting from the gift of the nature, people’s awareness on environmental protection has been largely improved over the years.

We used to eat birds around here, but now we are committed to protecting them. And we don’t cut trees for money any more. We no longer think of damaging the environment, Cai said.

The local government sees the industry as a way to boost tourism to the area, and is stepping in to introduce a platform company to encourage efficient growth.

Yan Bu, head of the Yingjiang County, said the government would try to improve infrastructure and services to this area in terms of eating, lodging and transportation.

In this way, the profits for the locals are expected to be maximized, said Yan.

Calling himself a bird guide, Cai is the father of three. On the weekends, he teaches his kids to recognize the different birds of the woods.

He said he hopes his children and their friends can become knowledgeable about birds. He believes the way to protect the creatures and their habitats should be passed down from generation to generation.

Email ThisBlogThis!Share to TwitterShare to FacebookShare to Pinterest
Labels: Birdwatchers