ICELAND: WOW To Commence Flights To Orlando On Dec. 18th 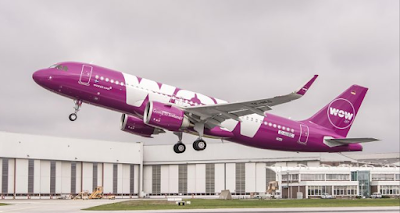 The Central Floridian city will be served from the airline’s main hub at Keflavik International Airport, 40 minutes from Iceland’s capital of Reykjavik, on a seasonal basis, and is the first city in Florida to be served by WOW.

The inaugural flight is scheduled for Dec. 18, with the service operating three times weekly during its operational period of December until the end of April.

The route is currently slated to be operated by the airline’s Airbus A321 aircraft and will mark the 14th destination to be served by WOW in the United States.

The outbound to Orlando, WW187, will depart Reykjavik/Keflavik at 4:40 p.m. and is scheduled to arrive into Orlando International Airport at 8:05 p.m operating on Mondays, Wednesdays, and Fridays during most weeks.

The return to Iceland, WW188, departs Orlando at 4:20 p.m and arrives in Iceland at 4:45 a.m. the following morning on Tuesdays, Thursdays, and Saturdays during most weeks.

The aircraft will stay overnight in Florida in order to facilitate onward transfers. According to the airline’s website, some weeks will see some variation in days of operation.

The arrival of the flight into Keflavik will be one of the first of the morning from the United States.

This early arrival will more easily allow passengers to process through what can be an extremely busy international arrivals facility.

As well as give them more time or explore Iceland or Keflavik Airport if they are simply passing through onward to mainland Europe or India once WOW starts flights to New Dehli in December.

Milan, Berlin, Edinburgh, and New Delhi, these are just some of the exciting new destinations that are just one-stop away from Orlando with the arrival of WOW Airlines, said Phil Brown, Chief Executive Officer of the Greater Orlando Aviation Authority.

WOW’s ability as an international low-cost carrier helps open doors for more business and leisure travel between Orlando and the world.

WOW Air will face direct competition from Icelandair who operates its fleet of Boeing 757 on the route.

The Icelandic flag carrier offers the same connection and stopover model as WOW but will be operating daily flights on the route starting Oct. 3.

The two airlines have been embroiled in an expansion war that has seen unprecedented service from Iceland to the U.S. in the past year alone at a lower cost than ever.