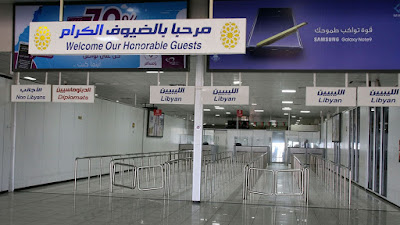 The only working airport in Libya's capital has diverted flights after it came under rocket fire late on Tuesday, less than a week after a fragile truce brokered by the United Nations between rival armed groups in Tripoli.

There were no casualties or damage, said a spokesman for a faction controlling Mitiga airport, the only one functioning in the capital.

It's reported that several people had been wounded by the rockets, one of which landed in the Mediterranean Sea.

Rival groups have been fighting in Tripoli for several days but clashes had been focused on the south of the city. Mitiga airport lies in an eastern suburb.

A Libyan Airlines flight bound for Tripoli from Alexandria, Egypt, was diverted to Misrata, said the airport on its Facebook page. Misrata lies about 190 kilometers (120 miles) east of Tripoli.

A spokesman for Misrata airport said that all flights bound for Tripoli would be diverted to Misrata.

An attack at Libya's only working airport on Monday left 20 dead and 69 injured, including civilians, according to a medical source.

Abduddayem Al-Rabri, director of Tripoli field hospital said that the injuries of the clashes at Mitiga International Airport are of varying degrees.

Earlier, he called on all Libyan doctors and medical assistants to help treat the injured.

The Special Deterrent Force, which is in charge of the airport's security, said an armed group attacked the airport with heavy weapons on Monday morning.

The criminal militia known as Bashir al-Baqarah and all the criminals wanted by the Deterrent Force attacked the international airport after escaping from jail and joining the militia, said the Special Deterrent Force, adding that the current situation is under full control.

The head of the Civil Aviation Authority Nasr-Addin Shayeb al-Ain said the airport was temporarily closed for security reasons.

A Libyan pilot said the airport, the scene of frequent clashes between rival militias, was evacuated.

All the staff and passengers who were at the airport were evacuated, the pilot said speaking on condition of anonymity.

Mitiga, a former airbase, has been a civilian airport since Tripoli's main international airport was badly damaged in fighting between rival militias in mid-2014.

Libya has plunged into chaos and political turmoil since former leader Muammar Gaddafi was toppled in 2011. The country is plagued with political division and escalating violence.

Terrorism has become a major threat to the deteriorating security situation in the country. ISIL terrorists continue to plan or carry out car bombs and suicide attacks in the North African country.

Last week, two ISIL fighter were arrested as they placed a car bomb near the industrial district of central Tripoli but failed to detonate it.