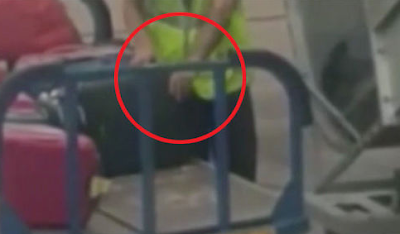 At an airport in Ibiza a baggage handler was nabbed on camera by a Ryanair passenger ploughing through bags after they had boarded, and stealing an item from a suitcase.

The Ryanair passenger was travelling from Ibiza to Madrid when he spotted the incident.

Footage captured the man opening a case on the luggage trolley that was waiting to be put on the flight.

He was then spotted taking a red speaker out and putting it in his pocket.

The person filming alerted a member of the cabin crew who contacted the police.

The baggage handler was then ordered to return the item to the rightful owner.

He is currently being investigated, having only worked for the airport for three days.

He was not a Ryanair employee.

It is thought that he is no longer working for the airport.

The luggage that was opened was thought to have belonged to a young boy who was travelling on the flight after visiting his brother who lives in Ibiza.

His mother said afer the return of the item: I was very grateful because I had bought it for my son’s birthday and it cost about 140 euros.

The flight then left two and a half hours later following the delay.

It isn’t the first time baggage handlers have been caught on camera treating luggage in a less than careful manner.

A passenger captured one worker at Manchester Airport throwing bags onto the baggage carousel carelessly.

A similar incident caught a woman working at Honolulu Airport in Hawaii hurling bags from the plane to a chute without much care.

Many were spotted bouncing off the chute and almost falling to the ground.

Both incidents were investigated at the time, according to the airports.

In Japan, however, baggage handlers have been spotted treating bags very differently at the airport.

A Japanese baggage handler was filmed carefully organising and cleaning suitcases as they were moved on a conveyor belt.

The young woman wearing gloves and wielding a cloth even polished some of them as they left the plane dirty.

Another man was caught on camera carefully placing suitcases on a truck when removing them from a plane.