USA: Man Sent To Prison For Smuggling Lion And Tiger Parts Worth $150,000 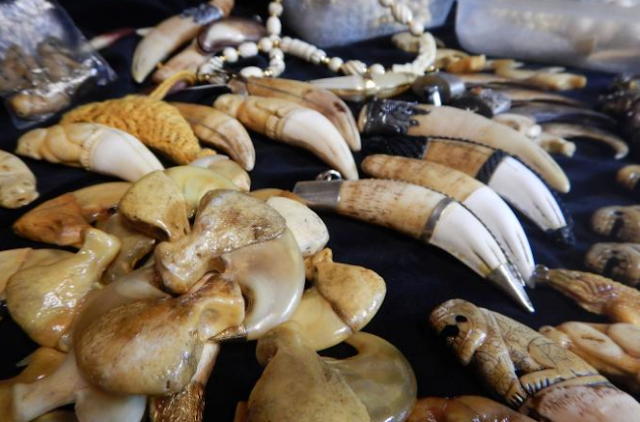 Officers monitoring black markets for wildlife products received intelligence in April 2016 that a man named Arogkron Malasukum, a U.S. citizen from Thailand, was on the hunt for a tiger skull. Malasukum, 42, who goes by Paul, said he’d pay $700 for the item.

Two weeks later Malasukum rapped on the door of a hotel room in the Dallas suburb of Lewisville, where his buyer and an associate, actually two undercover cops with the U.S. Fish and Wildlife Service were waiting with the merchandise.

Malasukum paid cash. Then he allowed one of them to come along while he packed and shipped the bleached skull to his address in Queens, New York.

Malasukum said he was looking for some straw buyers to purchase tiger and lion parts at an auction house in Fort Worth, Texas.

He couldn’t buy the items because he lived in New York, and if he transported them to another state he’d be committing a felony in violation of the U.S. smuggling law.

The buyers were from Texas, allowing them to appear to be purchasing the skull legally.

The next day the men went to the auction. Communicating by text messages, speaking in hushed phone calls, and holding hurried meetings outside the auction hall, Malasukum orchestrated an agent’s bidding on a variety of wildlife items.

This including some body parts from an endangered African lion, spending more than $1,700 for his purchases.

Arriving back in New York, he yanked the dagger-sharp teeth out of the skull and sorted them and the other parts and claws from the auction into separate packages, a precaution to protect him from losing everything if an intact skull was intercepted by authorities.

He organized claws into different parcels. To disguise the contents, he wrote dog toys and home decorations on the labels.

Then he shipped the packages to a wholesale buyer in Thailand who makes jewelry trinkets and pendant necklaces from the tiny fragments of fierce creatures that once prowled the African savannas, kings and queens of their former domains.

Tiger and lion teeth and claws are highly sought in Asia to be made into pendants, believed to provide protection, and for ingredients in traditional medicines used to treat ailments and disease ranging from insomnia to malaria.

For the next year and a half, the agents maintained their cover as straw buyers, continuing to gather evidence until in October 2017 Malasukum was finally charged for smuggling 68 packages of lion and tiger parts worth $150,000.

In November he pleaded guilty to the charges, and on August 1, 2018, a federal judge in Sherman, Texas sentenced him to nine months in prison followed by one year supervised release for trafficking endangered wildlife.

It took hundreds of hours of undercover work, going through emails and text messages, and executing search warrants to prove the case, said Phillip Land, a Fish and Wildlife special agent who supervised the investigation.

Malasukum’s attorney, Denise Benson, advised her client not to comment on this sentencing, because his understanding of English is limited, she said. But she confirmed that the court has directed him to report to jail on September 10.

According to the Justice Department, Malasukum’s case stemmed from an ongoing major Fish and Wildlife Service investigation targeting the illegal trade in rhinoceros horn and elephant ivory in response to international poaching and smuggling syndicates.

Named Operation Crash, the term for a group of rhinos, the multinational covert operation began seven years ago when wildlife law enforcement became aware of an increase in rhino poaching.

To date, dozens of people have been convicted of illegally trafficking rhino horns from Africa, resulting in more than $2.1 million in fines, $5.6 million in restitution, and 438 months in federal prison, according to the Fish and Wildlife Service.

Each case has provided additional intelligence about other traffickers exploiting imperiled wildlife, from rhinos and elephants to tigers, lions, and pangolins.

Shennie Patel is a trial attorney in the Justice Department’s environmental crimes section who specializes in wildlife trafficking cases.

The Malasukum case reminded her of a 2013 Operation Crash conviction involving a father-son team, Vinh Chuong “Jimmy” Kha and Felix Kha, who were buying rhino horns and exporting them to Asia to be intricately carved into libation cups featuring twisting vines, landscapes, animals, and other designs.

Older people use the cups for traditional medicine, but the newly wealthy younger generation in Asia increasingly seek the cups, worth up to half-a-million dollars, as status symbols. Jimmy and Felix Kha made millions tapping into that high-end market.

Like the Khas, Malasukum was in the business of buying and selling, mainly at auctions. Those auctions often present opportunities for nefarious shoppers, Patel said.

The law says the auctions can sell protected species parts, and you can buy them, but you can’t turn around and sell them to someone in another state or another country, Patel explained.

That’s a federal violation. Most auction houses post signs about the law, but how do they keep track of what happens after buyers leave?

The demand for these parts is causing animals like rhinos, elephants, tigers, and lions to be poached at unprecedented rates. And the more rare an animal becomes, the more interest there is for trinkets.

A century ago, a hundred thousand wild tigers roamed Asia, from Turkey in the west to the eastern coast of Russia.

Today fewer than 4,000 remain in only 4 percent of their former range, according to the International Union for Conservation of Nature (IUCN), which keeps a red list of species’ conservation status.

The downward spiral of the tiger population is expected to continue in the face of ongoing habitat loss and poaching for the wildlife trade.

Lions are in serious trouble too. In the span of only a hundred years, lion populations have fallen from 200,000 to 20,000, according to the IUCN.

Killings in defense of people and livestock pose the biggest threat, but the trade in bones and other parts is playing a significant role too.

This has to stop, Patel said. We’re reaching a point where we are going to lose the tigers in a few years, and lions will be on their way too.

With Malasukum’s conviction, wildlife crime fighters can chalk up another victory, though a small one in the grand scheme of the $20 billion illicit wildlife trade.

The future of the world’s most charismatic species rests heavily on the unssuaged demand for their parts.