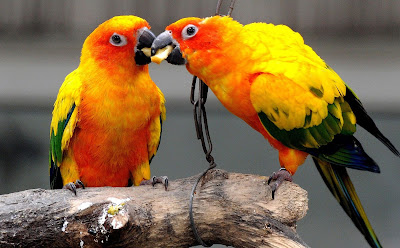 Parrots are common pets in China, but for one owner they have proved costly housemates.

A man in the southern city of Shenzhen was sentenced to five years in prison for keeping and selling parrots, because two of them were on the endangered wildlife list.

Ren Panpan, wife of the guilty man named Wang Peng, was devastated, saying her husband would never have raised the parrots had he known it was illegal.

She says Wang brought home his first parrot in 2014, when he discovered it in the factory at which he worked. Wang’s colleague Cao was at the scene and testified to this statement.

Ren said her husband then searched online and realized it was a small male sun parakeet. For breeding, Wang Peng bought two female parrots. One year later, he had 51 parrots.

In April 2016, the couple’s child was diagnosed with a disease called congenital megacolon.

Wang found it difficult to take care of his son, the parrots, and also work. So he decided to sell six baby parrots at 500 yuan (about 72 US dollars) each to his friend Xie Tianfu who ran an aquarium.

Law expert Xu Xin has now taken over the case, and will help Wang appeal the conviction.

Xu argues that although the parrot is on the list of endangered wildlife, Wang bred and kept the parrots by himself, which should be categorized as one’s personal property.

He also believes Wang did nothing wrong by increasing the number of the species. And he emphasizes the fact that Wang only sold six birds last year, suggesting he wasn't attempting to run a business.

Whatever the result, the couple and the animal breeding community will learn from the case.

I guess most people don’t know it’s illegal to raise this kind of parrot, Wang wrote in a letter to his wife.

Our lives have been changed. What a lesson on law, said Ren.