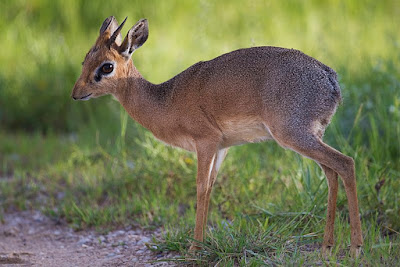 A dik-dik is the name for any of four species of small antelope in the genus Madoqua that live in the bushlands of eastern and southern Africa.

Dik-diks are named for the alarm calls of the females. In addition to the females' alarm call, both the male and female make a shrill, whistling sound. These calls may alert other animals to predators.

The name dik-dik comes from an onomatopoeia of the repetitive dik sound female dik-diks whistle through their long, tubular snouts when they feel threatened.

Female dik-diks are somewhat larger than males. The males have horns, which are small, about 7.6 centimetres or 3 in, slanted backwards and longitudinally grooved.

The hair on the crown forms an upright tuft that sometimes partially conceals the short, ribbed horns of the male.

The upper body is gray-brown, while the lower parts of the body, including the legs, belly, crest, and flanks, are tan.

A bare black spot below the inside corner of each eye contains a preorbital gland that produces a dark, sticky secretion. Dik-diks insert grass stems and twigs into the gland to scent-mark their territories.

Apparently to prevent overheating, dik-diks have elongated snouts with bellows-like muscles through which blood is pumped.

Airflow and subsequent evaporation cools this blood before it is recirculated to the body. However, this panting is only implemented in extreme conditions; dik-diks can tolerate air temperatures of up to 40 °C (104 °F).

Dik-diks live in shrublands and savannas of eastern Africa. Dik-diks seek habitats with a plentiful supply of edible plants such as shrubs.

Dik-diks may live in places as varied as dense forest or open plain, but they require good cover and not too much tall grass.

They usually live in pairs in territories of about 5 hectares (12 acres). The territories are often in low, shrubby bushes sometimes along dry, rocky streambeds with plenty of cover.

Dik-diks, with their dusty colored coat, are able to blend in with their surroundings.

Dik-diks have an established series of runways through and around the borders of their territories that are used when they feel threatened.

Dik-diks are herbivores. Their diet mainly consists of foliage, shoots, fruit and berries, but little or no grass. They receive sufficient amounts of water from their food, which makes drinking unnecessary.

Like all even-toed ungulates, they digest their food with the aid of micro-organisms in their four-chambered stomachs.

After initial digestion, the food is repeatedly eructated and rechewed, a process known also as rumination, or chewing the cud.

Dik-diks' tapering heads may help them eat the leaves between the spines on the acacia trees, and feed while still keeping their head high to detect predators.

Dik-diks are monogamous, and conflicts between territorial neighbors are rare. When they occur, the males from each territory dash at each other, stop short, vigorously nod their heads and turn around.

They will repeat this process, increasing the distance each time until one stops. Males mark their territories with dung piles, and cover the females' dung with their own.

Monogamy in dik-diks may be an evolutionary response to predation; surrounded by predators, it is dangerous to explore, looking for new partners.

Pairs spend about 64% of their time together. Males, but not females, will attempt to obtain extra-pair mating when the opportunity arises.

Females are sexually mature at six months and males at 12 months. The female gestates for 169 to 174 days and bears a single offspring.

This happens up to twice a year at the start and finish of the rainy season. Unlike other ruminants, the dik-dik is born with its forelegs laid back alongside its body, instead of them being stretched forward.

The mother lactates for six weeks, feeding her fawn for no longer than a few minutes at a time. The survival rate for young dik-diks is 50%.

The young stay concealed for a time after birth, but grow quickly and reach full size by seven months. At that age, the young are forced to leave their parents' territory.

The fathers run the sons off the territory and the mothers run off the daughters.

Dik-diks' adaptations to predation include excellent eyesight and the ability to reach speeds up to 42 km/h (26 mph).

People are the dik-diks’ biggest threat and have long hunted them, setting snares along their paths.

Small bones from their legs and feet are used in traditional jewelry. Their skins are often made into suede for gloves.

With the strategic support of African Wildlife Foundation, the Entonet/Elerai Masaai community opened Satao Elerai, a luxury lodge situated on 5,000 acres of land in Southern Kenya.

Revenue from the lodge is reinvested into supporting the community and conserving wildlife such as the dik-dik.

With your help, AWF can work on projects like supporting conservation businesses in places where dikdiks live as well as helping park rangers and wardens with technology to monitor parks and keep the dikdiks safe from poachers.

Donate for a cause that will help with wildlife conservation and ensure dikdiks never become an endangered species.