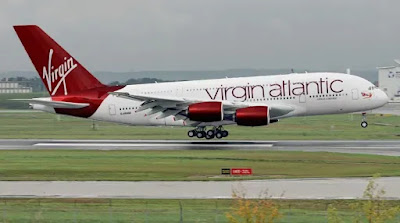 The struggling A380 superjumbo program at Airbus has been hit with more disappointment as Virgin Atlantic cancels its order for six of the 550-seat plane.

While an initial delivery date had been set for 2006, continued delays on Airbus’ side, followed by postponements on the side of Virgin Atlantic, meant not one of the planes ordered was ever delivered.

Virgin Atlantic was one of the very first customers to have placed an order for the new model, it’s initial order for six of the jets also came with an option for a further six.

In the meantime, Virgin Atlantic has been increasing the size of its fleet of jets with the acquisition of a number of smaller twin-engine jets from Airbus, notably the A350 – 1000.

It was revealed earlier this month that Airbus is having to consider the fate of 3,700 staff who were employed either on the A380 or A400M turboprop military plane package.

It has not all been bad news for the A380 though.

In February the whole future of the program hung in the balance until Gulf Carrier Emirates, the most prolific customer for the superjumbo, firmed up on an order for 20 of the planes.

This was with an option for 16 more, guaranteeing the programs existence for the next ten years.

Deliveries of these newly ordered aircraft are expected to begin in 2020.

To date, Airbus has delivered 221 of the now revised 325 jets ordered.