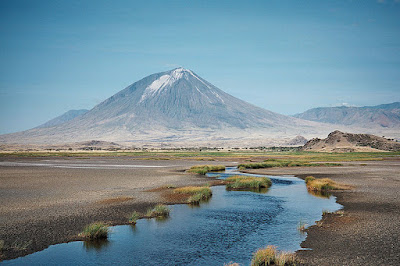 Ol Doinyo Lengai, Mountain of God in the Maasai language, is an active volcano located in the Gregory Rift, south of Lake Natron within the Arusha Region of Tanzania.

Part of the volcanic system of the East African Rift, it uniquely produces natrocarbonatite lava.

The 1960 eruption of Ol Doinyo Lengai led to geological investigations that finally confirmed the view that carbonatite rock is derived from magma.

There is only one volcano in the world which is erupting carbonatite lava: Ol Doinyo Lengai in Tanzania.

This is not just another dry fact for nerdy scientists: this volcano is very unusual place without analogues in the world.

The volcano is some 370 thousand years old and is the youngest volcano in this part of the East African Rift.

Ol Doinyo Lengai is unique among active volcanoes in that it produces natrocarbonatite lava, a unique occurrence of volcanic carbonatite. A few older extinct carbonatite volcanoes are located nearby, including Homa Mountain.

Whereas most lavas are rich in silicate minerals, the lava of Ol Doinyo Lengai is a carbonatite. It is rich in the rare sodium and potassium carbonates, nyerereite and gregoryite.

Due to this unusual composition, the lava erupts at relatively low temperatures of approximately 510 °C (950 °F).

This temperature is so low that the molten lava appears black in sunlight, rather than having the red glow common to most lavas. It is also much more fluid than silicate lavas, often less viscous than water.

The sodium and potassium carbonate minerals of the lavas erupted at Ol Doinyo Lengai are unstable at the Earth's surface and susceptible to rapid weathering, quickly turning from black to grey in colour.

The resulting volcanic landscape is different from any other in the world.

The carbonatite ash spread over the surrounding grasslands leads to a uniquely succulent, enriched pasture.

This makes the area a vital stage on the annual wildebeest beast migration, where it becomes the nursery for the birth of several thousand calves.

Of course, local people noticed this giant volcano which is rising tall above the dry plains south from Lake Natron.

In East African Rift are located many magnificent volcanoes, not too far are the magnificent Mount Meru and Ngorongoro Crater.

But this volcano was very special to Maasai people - it was a sacred place named Mountain of God or Ol Doinoy Lengai.

This part of Africa was one of the last places reached by white people, first European visitors to Ol Doinyo Lengai were German explorers in the late 19th century.

This volcano is very active, every few years here takes place an eruption.

One of these eruptions in 1960 attracted the attention of Canadian geologist John Barry Dawson who was mapping this part of Tanzania.

He and Ray Pickering descended in the crater of volcano, this was the first known descent in the crater in October 1960 and immediately noticed that this volcano is very unusual.

Soon after, in 1962 there was published his research and the first and only active carbonatite volcano on Earth was discovered.

Since then Ol Doinyo Lengai has been a playground for geologists exploring this unique natural wonder. Dawson himself continued the research until his decease in 2013.

Today volcano is rather popular tourist attraction. Fittest visitors are ascending the mountain under the heat of the equatorial Sun and try to get closer to live volcanic activity.

This is dangerous - this weird volcano is even less predictable than others and threats are looming in seemingly calm places.

Nearly all volcanoes on Earth are spewing lavas which consist of silicate minerals. Only some have been erupting lava which per more than 50% consists of carbonate minerals - carbonatite lavas.

There are known some 20 locations of former carbonatite volcanoes but Ol Doinyo Lengai is the only one which is active now.

This material needs considerably lower temperature for melting - this lava is flowing already at 500 - 600 °C temperature and in the daylight this lava is not even glowing - it is just a flow of pitch black stream.

In the night lava glows in orange color. Usual lavas have a temperature os some 1100 °C.

Carbonatite lava is also quite fluid in comparison to common silicate lavas, it is the most fluid lava in the world flowing almost like a water often faster than a person can run.

Flow of this lava looks like dark oil or brown, muddy foam.

As the lava hardens, it is pitch black, with glistering crystals in it. But it is not for long: these carbonatite lavas are quickly weathering. In a few hours time the stone turns white due to the moisture.

If the weather is dry, lava turns white in a few days time. If the rain is raining lava becomes white immediately.

This is caused by a chemical reaction similar to a reaction of burnt lime. Due to this both nyerereite and gregoryite are very rare minerals which even in geological collections should be kept in argon atmosphere.

Over the time the white lava turns into brown powder. After few months lava is soft, one sinks in it when walking.

The landscape of Ol Doinyo Lengai is unique, without analogues in the world.

Ol Doinyo Lengai is the only active volcano in Tanzania. It is very active and is erupting lava and ash every few years.

Sometimes, when the content of silicates in lava increases, eruptions of volcano become explosive, sometimes starting with impressive lava fountains such eruption took place in 2007 - 2008.

Before these eruptions there happened many earthquakes, even lions left the area and it was also decided to evacuate also people and their cattle in safe distance from the volcano.

During the eruptions in the crater often form hornitos, smaller hills and even towers, which emit the carbonatite lava. Lava sometimes forms short-lived lava lakes.

Since 1983 the lava has gradually filled the crater and now it is filled with carbonatites and it seems that this is endangering the stability of crater rims.

As the carbonatite lava spread over the surrounding plains, it has changed the soil. These grasslands are rich with succulents and serve as pasture for numerous wildebeest calves.

A major eruption occurred on 14 August 1966. Geologists J. B. Dawson and G. C. Clark visited the crater a week later and reported seeing a thick column of black ash that rose for approximately three thousand feet above the volcano and drifted away northwards towards Lake Natron.

When they climbed the cone-shaped vent, they reported seeing a continuous discharge of gas and whitish-grey ash and dust from the centre of the pit.

2007 - Volcanic activity in the mountain caused daily earth tremors in Kenya and Tanzania from 12 July 2007 until 18 July 2007 at 8.30pm in Nairobi. The strongest tremor measured 6.0 on the Richter scale.

Geologists suspected that the sudden increase of tremors was indicative of the movement of magma through the Ol Doinyo Lengai.

The volcano erupted on 4 September 2007, sending a plume of ash and steam at least 18 kilometres (11 mi) downwind and covering the north and west flanks in fresh lava flows.

2008 - The 2007 eruption continued intermittently into 2008. At the end of February it was reported to be gathering strength, with a major outburst taking place on 5 March.

Periods of inactivity were followed by eruptions on 8 and 17 April. Eruptive activity continued until late August 2008.

A visit to the summit in September 2008 discovered that lava emission had resumed from two vents in the floor of the new crater. Visits to the crater in March/April 2009 showed that this activity appeared to have ceased.

2010 - In October 2010, two separate lava flows and a small lava lake were photographed in an overflight.

2013 - The volcano resumed natrocarbonatite lava flow which started to fill the large crater from the 2007-2008 eruption.

As of July 2013, there was a large active hornito on the western edge of the crater floor. During June, residents near the volcano reported several earthquakes.

The new crater is inaccessible and climbers have only occasionally glimpsed into it.