BRAZIL: Robbers Invade Viracopos International Airport And Take Off With $5 Million US Dollars 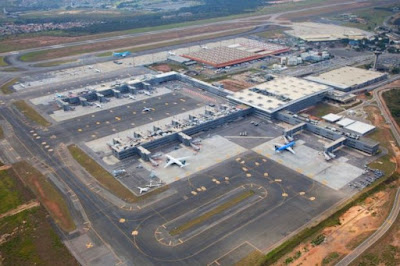 A group of thieves stole US$5mil in cash, which had been due to travel from Brazil to Switzerland aboard a Lufthansa jet, at a large freight airport near Sao Paulo, police said on Monday March 5.

The spectacular heist, which took place late Sunday, was completed in a matter of minutes, and authorities have yet to arrest a suspect.

The crooks entered Viracopos International Airport's freight terminal using a pickup on which they had placed stickers mimicking the runway security company's logo, federal police said in a statement.

Germany-based Lufthansa's plane had been travelling from Guarulhos airport in Sao Paulo and was making a stop at Viracopos – Brazil's biggest freight terminal – with Zurich as its final destination.

The stolen money had been held under the auspices of secure transport provider Brinks.

Five men had threatened security agents on the runway before taking off with the cargo, in barely six minutes.

At least five men disarmed security guards and locked them up in their vehicles before making a quick getaway.

The brazen heist is reminiscent of the $5 million Lufthansa robbery at JFK airport in 1978, which is portrayed in the movie Goodfellas.

There was no immediate sign of injuries, the airport said.

Cargo theft is on the rise in Brazil, where most targets are semi-trucks, especially those serving Rio de Janeiro.