KENYA: Emirates Has Not Canceled Flights Between Nairobi And Dubai, General Miguna Miguna Forced On Board 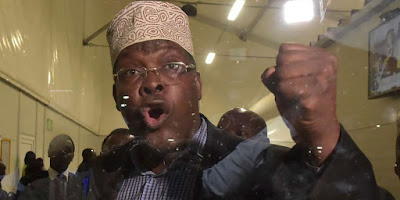 The airline maintained its flights between Nairobi and Dubai were on schedule contrary to the allegations posted on lawyer Nelson Havi's official Twitter page.

Emirates’ flights between Nairobi and Dubai continue to operate as scheduled, said the airline.

Dr Miguna on Thursday morning deported to Dubai aboard a EK722 Emirates flight following his detention at the Jomo Kenyatta International Airport (JKIA) since his arrival on Monday at 2.30 pm.

In sworn suit documents, Dr Miguna’s lawyers claimed the self-proclaimed National Resistance Movement (NRM) general had been held incommunicado in a toilet at Terminal 2 at the airport and that his Canadian passport had been withheld.

Self-declared 'general' of National Resistance Movement (NRM) Miguna Miguna has confirmed his lawyers' claims that he was drugged before being deported to Dubai on Wednesday night.

In his first Facebook post on arrival in Dubai, the lawyer on Thursday morning said he very sick and needs urgent medical attention.

“I was dragged, assaulted, drugged and forcefully flown to Dubai,” he posted.

“I woke up in Dubai and the despots are here insisting that I must travel on to London.”

He added, “I’m sick. My ribs and body is hurting all over. This is a travesty of justice! I need medical treatment. I need urgent help here.”

Dr Miguna accused an officer he only identified as Mr Njihia for threatening him and remained adamant that he would not leave the airport.

I want to take a flight only to Nairobi. Nowhere else!

Lawyer Cliff Ombeta, who represented Dr Miguna, on Wednesday night claimed that his client was sedated, handcuffed and taken away.

The airport was on police lockdown on Wednesday night, with police in full combat gear attacking journalists and lawyers who attempted to access Dr Miguna.

The lawyers had gone to the airport to serve court orders directing his release when they were roughed up.

Some sources claimed the exit Dr Miguna, the self-declared ‘general’ of the National Resistance Movement (NRM), a wing of the Nasa that was formed to champion resistance against products of firms deemed friendly and financiers of Jubilee government, was facilitated by Canada.

The lawyer holds Canadian citizenship and has denied government claims that he acquired it after ceasing to be a Kenyan in 1998.

Dr Miguna, who ran for Nairobi governorship in Kenya's August 8, 2017 General Election and has two homes, one in the capital and the other in Nyando, Kisumu County, insists he is a Kenyan by birth.

The self-declared general of National Resistance Movement (NRM) was kicked out of Kenya on Wednesday evening in breach of three High Court orders.

In a video recording posted by Gatundu South MP Moses Kuria, who appeared to have boarded the same flight with the fiery lawyer, Dr Miguna is seen arguing with a security officer telling him to kill him if he wants.

The airport officer is heard offering a wheel chair to ferry Dr Miguna to the security office.

I don’t want. You don’t respect human rights, Dr Miguna is heard shouting the officer down.

The self-declared general of National Resistance Movement (NRM) is seen trying to make some calls as the security officer pleads with him.

So far, there has been no official statement on the second deportation from the government.

Dr Miguna's social media accounts earlier indicated he was being held in a toilet at Jomo Kenyatta International Airport's Terminal 2.

This morning at Dubai International Airport I bid farewell to the leader of the breakaway Eastern Suburbs of Toronto, NRM General Miguna Miguna, who completed a successful 4-day state visit to Kenya, posted the MP, a staunch supporter of Jubilee and President Uhuru Kenyatta.

Aboard Flight EK 722. I can positively confirm that we have all nationalities on this flight, including a very bald headed Canadian.