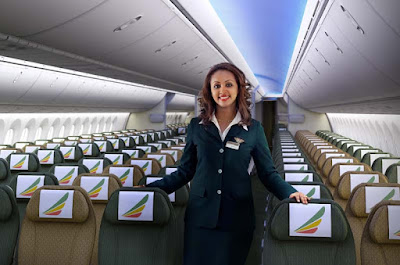 Africa’s largest airline group, Ethiopian Airlines, hosted some Nigerian journalists to a boat cruise in Lagos for supporting the carrier for the 2017 operational year.

The airline said the boat cruise was a way of saying thank you to the journalists who had continued to be a source support to the carrier in the aviation industry.

Speaking during the cruise, General Manager of Ethiopian Airlines in Nigeria, Mrs Firihewot Mekonnen said the carrier will continue to deploy its best and newest planes to the Nigerian market.

Mekonnen disclosed that Ethiopian airlines which introduce the newest Boeing 787-900 to the Abuja route will also deploy it to Lagos in the coming days adding that the airline has always considered the Nigerian market as a vital aspect of its business.

She said Ethiopian has high regard for the Nigerian market which informed why the Airline is always bringing her newest aircraft to the country, including the first all-female flight in Africa.

Mekonnen said she is looking forward to African airlines dominating the African skies, instead of foreign airlines adding that, that is one of the reasons the airline is assisting some other African countries in setting up their own national carrier.

She added that the airline is ready to assist other countries with its technical knowhow.

She expressed satisfaction with the figures released by the Nigerian Civil Aviation Authority, NCAA which showed the Airline as the leading carrier that lifted the highest numbers of passengers in Nigeria in 2017, ahead of other mega carriers.

Mekonnen noted that this is the first time an African airline will be leading in the airlift of passengers in Nigeria, beating other big airlines from Europe, America and Asia.

She said the airline is working hard to consolidate on that feat in their operations in the country.

She stated that she looked forward to the day when African carriers will have a larger percentage of the market share in the continent, noting that 80% of passengers are carried by non African airlines in the continent.

Mekonnen added that Ethiopian Airlines is poised to promote the growth of aviation in Africa so that African carriers can also take the lead in the airlift of passengers in Africa.

The Ethiopia Airline general manager in Nigeria stated that this was responsible for why it is helping to establish national carriers for some African countries.