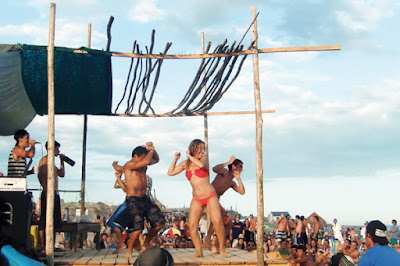 As Buenos Aires gradually turns from colourful springtime metropolis to suffocating summer furnace, the proper thing to do is join the mass porteno exodus and head for the coast.

Bear in mind that the vast majority of Argentines travel in January and February, when accommodation prices are highest and the beaches most crowded.

Whilst Argentina is not renowned for its beaches, holidaying on the Atlantic Coast of Buenos Aires Province is probably the most popular option for tourists.

For family vacations, the northern beaches of Partido de la Costa, the closest to BA, are a bit of a favourite.

With attractions like Sea World, a water park, and prices lower than in other areas along the coast, it has a relaxed vibe but with plenty of things to do.

Partido de la Costa extends from San Clemente del Tuyu down to Costa Esmeralda, and has an assortment of bigger towns and smaller seaside resorts.

For those looking for some city action to go with their beaches, the obvious choice is Mar del Plata.

Considering that about half of the total population of BA moves to Mardel in summer, walking around the city feels like walking along Av. Corrientes on peak hour but with the ocean nearby.

The city’s small beaches get impossibly crowded, but if you want nightlife, theatre, people watching or to gamble away your accommodation money in the iconic casino, this is the place to be.

There are, of course, less intense options. Villa Gesell is one of the biggest cities on the coast, and it’s usually known for its young vibe.

While it’s not the most attractive city, it does have large, wide beaches and easy access to smaller and nicer resorts like Mar de las Pampas, Las Gaviotas, and Mar Azul.

Mar de las Pampas is in itself a good option for those looking for a more upscale kind of holiday.

Fancy hotels, good restaurants, and plenty of cute shops set in the middle of a forest by the sea, it’s as good as it gets on the Atlantic Coast.

A similar style can be found in the small, foresty towns of Carilo and Valeria del Mar, all a stone’s throw away from the most exclusive of Argentina’s seaside towns.

The larger Pinamar, the place were politicians and businessmen go to tan.

While it’s impossible to fully escape the crowds in summer especially in January, those looking for relaxation could try the beaches south of Necochea, such as Claromeco, Orense, or Monte Hermoso touted as the only place in the country where you can see the sun come up and go down in the sea.

Finally, and moving further south, those willing to venture out to the coast of the Rio Negro province should head out to Las Grutas, for many the best beach in Argentina, blessed with clear, warmer water, and a very different vibe to that of its northern neighbours.

Given its modest scale and proximity to Buenos Aires, the beaches of Uruguay are just as accessible in terms of distance, though a little more expensive, than the Atlantic Coast.

You’ll find sandy stretches as soon as you land on the other side of the Rio de la Plata, but the best beaches are east of the capital Montevideo.

The best known and most upscale resort is Punta del Este. Sometimes known as the Beverly Hills of South America, the thin peninsula offers plenty of opportunities for celebrity spotting, be it sunbathing on the beach, picking out a pair of designer sunglasses, or dancing all night to some of the region’s top DJs.

Some of Punta’s best nightlife is just east of the peninsula in uber-trendy La Barra, while the village of Jose Ignacio, just a little further east, has become arguably the most exclusive fishing village in South America.

Things get less ostentatious and a good deal cheaper further up the coast. Cabo Polonio is Punta’s polar opposite, devoid of luxury trimmings and even basic commodities like roads and electricity.

In the summer, 4×4 jeeps pick up travellers from the main road and drop them off in the tiny village, where a good book is probably the most valuable thing you can have.

Heading further towards the Brazilian border, the beaches become more open and deserted, with only a few quiet resorts catering to tourists.

One of the most popular is Punta del Diablo, where backpackers and surfers share pretty beaches with the local fishermen.