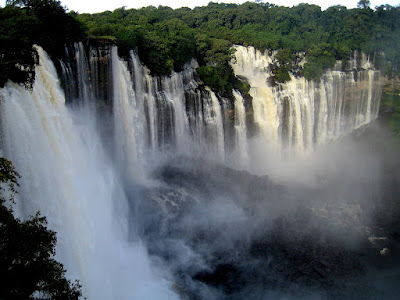 They are one of the largest waterfalls by volume in Africa.

The distance from Luanda is 360 km.

Water flows thru the rocks to the edge, rocks which are abraded by the omnipresent waters outside of Kacimbo

Standing on the edge, watching the force of nature, broad streams of water fall down.

The water forms hills of the stones ground out of the mountain. The waterfall is actually a quarry spraying water over bushes and tart-like rocks.

A closer look at the terraces formed by the Kalandula water fall, the Lucala River continues after the Kalandula Falls into the plains.

There are visitor places on both sides of the canyon formed by the Kalandula Falls.

Ending the visit to the falls over the rocks washed by the abundant waters flowing in the wet season. This visit was in the dry season - Kacimbo, as the Angolans say.

- A collection of waterfalls

- By volume is one of the largest in Africa

- The Lucala River is the source of the falls

Kalandula Falls of Angola is a collection of waterfalls that when measured by volume, is one of the largest waterfalls in all of Africa.

Somewhat shaped like a horseshoe, Kalandula Falls is formed from the waters of the Lucala River, which is in fact the largest tributary of Kwanza.

Numerous separate trickles smaller in size near the many boulders and crevices that are found on the perimeter of the Kalandula make up the entirety of the falls.

Because of its natural age, the sediment that the waterfall is formed from is now eroding and large boulders along with smaller rubble have been known to fall from time to time.

Although it may sound like a possible danger to visitors, the fallings usually come down with the water, which means as long as you don’t submerge yourself under the waterfall you are free from any sort of danger.

Around the Lucala River and the falls itself is a rather large rainforest made up of tropical and subtropical grasslands as well as diverse vegetation.

Though possible to walk through, there is a lack of signage and well-kept trails to guide any visitors who wish to explore outside of the falls.

Kalandula Falls is located in Angola, a larger country on the continent of Africa.

Found within the Malanje Province and 420 kilometers (261 miles) from Luanda, the capital of Angola.

Being that far away from the main city, it will take approximately 5 hours by car to reach Kalandula Falls.

The roads along the way are manageable but as with all longer drives in this region, caution is to be taken.

Despite being a magnificent natural wonder of the world, it is very rare that you will run into many crowds when paying a visit to Kalandula Falls.

A combination of the long drive and travel to get there turns people off from making the effort to come. However, nearly everyone who has decided to visit simply can’t say enough of its breathtaking beauty.

If you don’t mind the rain, the springtime is the best season to experience the true splendor of this place.

Because the rains contribute to the strength of the waterfall, it makes for an even more magical show when gazing up at the massive Kalandula Falls.

There is a sightseeing spot available for visitors but to make the absolute most of your visit here, be sure to wander through and around the surroundings of the falls and river.

You can spend hours just walking and strolling along the rocks and taking in all that this world wonder has to offer.

Be sure to pack and wear appropriate clothing such as rain gear and warmer clothes to possibly change into after your visit.

Whether you visit during the spring, summer, fall or winter, you will be sure to walk away marveled and in awe of the natural beauty of Kalandula Falls.